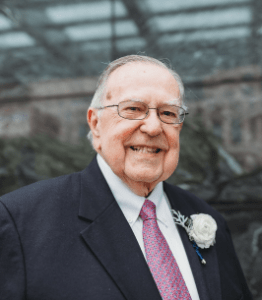 Shrewsbury – Thomas Dominic “Tom” Flaherty, 88, of Shrewsbury, MA peacefully passed away on Monday September 14, 2020. He is the beloved husband of Kathryn M. (Crawford) for 66 years.

Tom previously lived in Lynnfield, MA while raising his family. He was born October 3, 1931 to the late Thomas D. and Kathleen M. (Barrett) Flaherty in Providence, RI.

Tom graduated from LaSalle Academy in 1949 and The United States Military Academy at West Point in 1954. He obtained his Master’s Degree from New York University in 1960 and his Doctorate in Education from Boston University in 1983.

Upon graduation from West Point, Tom spent 3 years honorably serving his country and left active military in 1957 to join Bell Laboratories as an engineer. Tom worked at the Bell System for 30 years, retiring in 1985 as an Assistant Vice President with NYNEX. Upon his retirement, Tom pursued his next chapter, first working for the Town of Lynnfield and then co-founding and serving as President of Executive PC Education Centers, followed by TDF Associates consulting services. He shared his love of mathematics by teaching at Endicott College, Boston University and Quinsigamond Community College. Tom also was a certified phlebotomist and EKG technician.

As important as all of this was to Tom, he always said his greatest satisfaction in life was being with his wife Kathryn; his five children: Thomas W. Flaherty, of Westborough, Robert J. Flaherty and his wife Theresa, of Walpole, William J. Flaherty and his wife Patricia, of Grafton, Ann F. Wendth and her husband Jeffrey C., of Slingerlands, NY, and Donna M. Freeman and her husband John, of Southborough; his eleven grandchildren: Brian, Erin, Kevin, Rachel, Michael, Kelly, William, Matthew, Meghan, Patrick, and Caroline; and his sister, Ruth Boutelle, of North Carolina. Tom was predeceased by his parents, as well as a sister, Virginia Ahern of East Greenwich, RI.

In lieu of flowers, memorial donations may be made to La Salle Academy, 612 Academy Avenue, Providence, RI 02908.

Relatives and friends are invited to visit with Tom’s family between 9:00 and 10:30 AM on Friday September 18, 2020 at the BRITTON-SHREWSBURY FUNERAL HOME, 648 Main Street, Shrewsbury, MA. His funeral Mass will be celebrated at 11:00 AM at St. Mary’s Church, 640 Main Street, Shrewsbury, MA – masks will be required at the funeral home and church, and social distancing measures will be taken. Burial will be held privately at a later date.