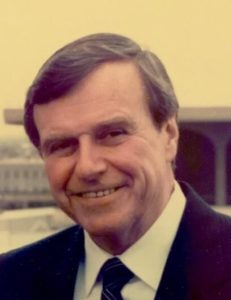 Southborough – John Francis Quinn, 84, of Southborough, died peacefully at his home with his wife and family by his side on Wednesday, September 23, 2020 after a long illness.

Born to John & Cecelia Quinn of Southbridge and attended college at UMass Amherst.  He had a very successful business career, culminating as President of Barry Controls and the Barry Wright Corporation. He was ahead of his time in successfully forging partnerships around the globe in the 70’s and 80’s. John also had a long allegiance with the Wentworth Institute of Technologies, serving on their Board of Trustees for a number of years.

Both John and his wife Connie were pilots, and enjoyed flying their Cessna 150 to locations around New England, preferably to airports in walking distance to the beach.  John had a passion for adventures in travelling, befriending many around the world that were fortunate enough to get to know him. Connie and John’s favorite places to travel were San Francisco, where they were married, Spain, and Germany.

John was a spiritual man spending much of his life in search of truth – and was a strong influence to his children, always encouraging us to do the same.  His interests spanned from the origins of mythology and religion and studying common themes shared across religions, to spiritual healing, where he dedicated a good portion of his time in helping others.   John was also an avid lover of nature and animals. He designed his home as a modern nature observation post, where over the years he and Connie would spend their time watching the local wildlife – where their back yard served as a refuge to upwards of 50 turkey’s roosting nightly. John often brought up the point that Ben Franklin lobbied hard for the Turkey to be our national bird. Seems apropos today.

Sense of humor and not always taking life and one’s self so seriously were also strong themes throughout John’s life.  He would start his Sunday mornings reading the funnies.  His favorite TV shows were the Road Runner, Pink Panther, Get Smart, All in the Family, and later in life, The Golden Girls.  He was an avid reader, but admits The Far Sideseries as being some of his favorite reads.

John also enjoyed an occasional beer and darts at the local pub – an excuse to get together and share a laugh with his buddies. Later in life, John and Connie enjoyed regularly dining at Kennedy’s, the Sole Proprietor, and other favorite locales.

As an audiophile, he always enjoyed music. John was the proud owner of one of the first pair of Bose 901’s ever manufactured. Frank Sinatra, Bill Evans, Mozart, Chopin, The Tijuana Brass, The Beatles, and Willie Nelson were some of his favorites, but he really just enjoyed good music. He gave those 901’s a good workout – as did the rest of the family.

The earliest memory of John’s children comes from Judy, his oldest daughter:

I remember as a 3 year old waking up early and ‘shaving’ with Papa John, and then eating Ritz crackers while he had breakfast. I wanted him to stay home, but he said “I have to go earn money to buy bread”.  I said “I don’t need bread!”

John was sweet, loving, kind and always available. We relished his company, and looked forward to the dinner table every night. He was a loving Grandfather, sharing many special moments with his grandson’s Frank, Johnny and Patrick.

His presence truly made anything better, and he naturally showed love and concern.  He was a rare man, loved by many, and will be missed by all.

Thank you Papa John. For all you gave, all you touched, all that you were.

A Funeral Mass will be at St. Anne Church, Southborough, on Tuesday, September 29, at 11 a.m. and followed by interment at Southborough Rural Cemetery. Covid 19 rules will be followed and the funeral will be live streamed (https://venue.streamspot.com/event/MjM1MDA4MA==) with the password:    johnquinn.

In lieu of flowers, memorial contributions may be sent in John’s memory to www.aspca.com.