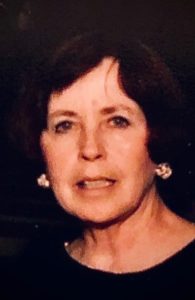 Westborough – Patricia A. (Cogavin) Barry, 85, died unexpectedly Wednesday October 14, 2020 at her home in Westborough.  She was born and raised in Brookline, the daughter of the late Michael P. and Catherine (Fahey) Cogavin and lived most of her adult life in East Longmeadow where she raised her family.

She grew up on grounds belonging to the Isabella Stewart Gardner Museum, where her father was the caretaker and horticulturalist, and continued to visit the museum throughout her life.  While in East Longmeadow, she worked for Cohoes, Hanes Hosiery, and her last job before retiring was with the Massachusetts Highway Department. She loved politics and was actively involved in local, state and national government. She enjoyed spending time on Cape Cod and cherished spending time with her family and friends. She was known fondly to all as “Patsy.”

She is survived by four sons; James Barry and his wife Valerie of Marlborough, Richard Barry and his wife Deborah of Avon CT, Douglas Barry and his wife Patricia of North Andover and Donald Barry of San Jose CA, one daughter Susan Barry-Fulop of Oak Hill VA, two sisters; Mary Clair of Woburn and Katherine Cogavin of Marblehead, twelve grandchildren and many nieces and nephews.  She was predeceased by her twin brother John “Jack” Cogavin of Winchester.

Her funeral will be held on Tuesday October 20, 2020 at 10:00 a.m. in Saint Lawrence Church, 46 Reservoir St. Chestnut Hill. Burial will follow in St. Joseph Cemetery in West Roxbury. Visiting hours will be held on Monday evening from 5:00-7:00 p.m. in the Short & Rowe Funeral Home (www.shortandrowefuneralhome.com), 95 West Main St. Marlborough.

Donations can be made to the Isabella Stewart Gardner Museum in memory of Patricia (Cogavin) Barry, https://tnew.gardnermuseum.org/donate/i/25 or Development Office, 25 Evans, Boston, MA 02115.