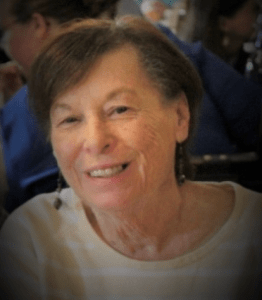 Marlborough – Gail E. (Squires) Hansen, 80, a longtime resident of Marlborough, passed away at Mass General Hospital, Boston. She was a strong, brave woman who courageously fought multiple health issues right up until the very end. She was the loving wife of 60 years to Carl R. Hansen and a generous, loving mother to her three children.

Gail was born and raised in Boston, one of five children to the late Samuel L. and Gertrude E. (Thompson) Squires. She was a graduate of the former Girl’s Latin High School and worked numerous years as an administrative assistant at TJX Corporate Headquarters, Framingham.

Gail and Carl relocated to Marlborough from Roslindale in 1973. She was an avid reader and enjoyed playing Mahjong or Whisk with her many friends. For several years Gail served as a Marlborough Brownie Troop Leader.

In addition to her husband, Carl, Gail is survived by her three children, Eric Hansen and his wife Becky of Jaffrey, N.H., Lisa Hansen of Lenox, and Scott Hansen and his wife Lindsay of Jenson Beach, Fla.; six grandchildren, Michael, Jeremy, Kaylah, Connor, Noah and Saraphina; two sisters, Janet Coletti of Medfield and Linda Chartier of Manchester, N.H.; as well as many nieces and nephews. Gail was preceded in death by her two siblings, Joan Brown and Richard Squires. Gail also leaves her lifelong best friend, Rosemarie Nashawaty, as well as many other lifelong friends.

Due to current Covid19 social restrictions, all services will be private for the immediate family. A time for all to gather and celebrate Gail’s life will be held at a later time.

Gail’s family respectfully request memorial donations be directed to the American Lung Assn, POB 11039, Lewiston, ME 04243-9409 (www.lung.org) in her honor.

Arrangements are under the care of Hays Funeral Home, 56 Main Street, Northborough. To leave a condolence, please visit www.HaysFuneralHome.com.