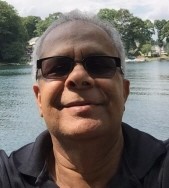 Edimar was a dedicated family man who put the needs of his loved ones before his. He loved spreading happiness to those around him and any who have had the privilege of meeting him can attest to the joy he brought to any gathering. When at family events, you could often find him grilling or in the center of the conversation, often cracking jokes at his own expense. He would play with his grandchildren as if he was one of them and kept up with them every step of the way. Though he worked his entire adult life, often two or more jobs at once, he had three careers that he would say were his most important: As a husband, a father, and grandfather.

Edimar is survived by his loving wife of 35 years, Magnolia Brito, his children Pedro Brito and Marielle Brito, his daughter-in-law, Jamie Brito, and his grandchildren Salyssa, Anthony and Nicolas, as well as many other, loving family members and friends both in the US and Brazil.

Relatives and friends are respectfully invited to attend Visiting hours on Thursday, November 5th from 5:00 pm – 7:00 pm at the Chiampa Funeral Home ~ 5 Church Road, On the Common, Shrewsbury Center.