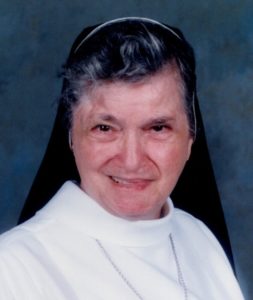 Marlborough – Sister Violanda (Anthony) Muia died on November 10, 2020 at St. Patrick’s Manor, Framingham. She was 98 years of age and was a Contemplative Sister of the Good Shepherd for 75 years.

She was born in 1922, in Carbondale, Pa., the daughter of Frank and Mary Muia. Sister attended the Carbondale schools and later entered the Contemplative Sisters of the Good Shepherd in Morristown, N.J. in 1945. She pronounced her first vows in 1948 and made her final profession in 1958.

Sister Violanda was a gifted seamstress and worked in the sewing department in Morristown for 26 years. In 1971 Sister was transferred to Peekskill, N.Y. where she engaged in the making of altar breads serving the parishes throughout the New York diocese.

In 1986, the Contemplative Sisters opened a new mission in Trenton, N.J. where Sister Violanda continued her work in the altar bread department for the next 14 years.

Sister was missioned to the Contemplative community in Dix Hills, N.Y. in 2000 and continued her ministry of prayer. Due to failing health, Sister Violanda retired to Good Shepherd Center in Marlborough in 2008 and then went to St. Patrick’s Manor in Framingham.

Sister Violanda was always of service to others at St. Patrick’s, often visiting those who were less able than she. She engaged in many of the activities and was especially gifted in her craft work.

Sister is survived by her brother, James Muia, his wife Connie, their son, William Muia and their daughters Lisa Muia and Tina Muia. She is also survived by four grandchildren, John Gandolfo, Angela Martinez, Jeanette McComis, Mathew Gandolfo, and six great-grandchildren.   She is also survived by several nephews and nieces. She was predeceased by her son, Anthony Gandolfo; her four brothers, Carmen, Cosmo, Herman and Nicholas; and two sisters, Ida and Frances.

Burial will be at Mt. Benedict Cemetery in West Roxbury on Monday, November 16 with a graveside service at 11 a.m.

Expressions of sympathy in Sister’s memory may be made to the Good Shepherd Retirement Fund, 420 Hemenway Street, Suite 466, Marlborough, MA 01752.

The Sisters of the Good Shepherd were founded by St. Mary Euphrasia Pelletier in Angers, France in 1835, in the United States (Louisville, Ky.) in 1843, and in Boston in 1867.