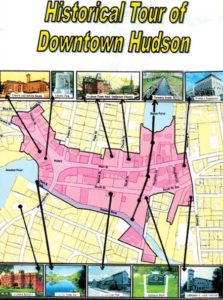 Hudson – With the coronavirus pandemic keeping some businesses closed, most people are on the lookout for other ways to stay occupied and have fun outdoors. The Hudson Historical Society’s newly expanded walking tour will help you get some fresh air and look at the town through a different lens.

Back in 2016, the town celebrated its 150th anniversary. The Hudson Historical Society participated in the festivities by creating a walking tour of the town. They put together a colored map of Hudson that highlighted a few dozen historical landmarks, and a brief description of each.

Richard Gelpke, one of the trustees of the Hudson Historical Society, decided there was more history to share than what was included on the map.

“Because I didn’t have anything else to do in my old age, I thought well, let’s expand on that,” said Gelpke.

With some help along the way, Gelpke expanded the double-sided map into a 156-page book, titled, “Historical Tour of Downtown Hudson.”

Filled with facts, maps and images, the book takes the reader through 72 places in the heart of Hudson. The stops are located along South Street, Washington Street, Main Street and Broad Street.

Each location includes a description about the history of the building and nearby area. Each location also includes “then” and “now” photos of the location.

In addition to stops along the walking tour, the book includes a few chapters that delve deeper into some of Hudson’s most historical events. One chapter discusses the great fire of 1894, which wiped out many buildings and acres of land. Although Hudson eventually recovered, it permanently changed the landscape of downtown.

Another chapter explores how the rotary has changed over time, and what was there before it was recently redeveloped.

Gelpke said with stops like the Victorian-style town hall and well-preserved church buildings, it’s hard to pick the best part of the walking tour. But regardless of which stop becomes your favorite, Gelpke said the tour can help people learn more about where they live.

“We wrote it to give people a background in their town. So, they have an idea of what came before,” said Gelpke. “You often think the town always looked like this, but it clearly did not.” 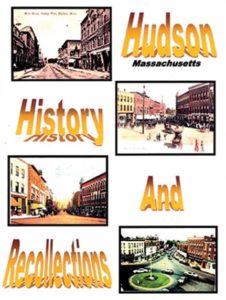 For those looking to learn even more about the town, Gelpke put together a companion book, titled “Hudson History and Recollections.” Instead of landmarks, the second book focuses more on the people who once lived in Hudson. It compiles diary entries and memories from those who lived there in the late 1800s and early 1900s, such as Fred Welsh, born in 1852, who worked as town clerk and described people who lived there at the turn of the century. Another example is Florence Brett, a teacher and caregiver born in 1849. Since she lived in Hudson for decades, she knew her neighbors very well, and wrote about them in detail.

Copies of both books ($15 each) may be ordered through the Hudson Historical Society, http://hudsonhistoricalsociety.org.