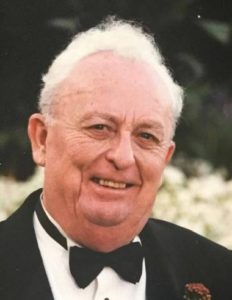 Westborough – William H. O’Rourke, 85, of Westborough, formerly of Southborough, passed away peacefully Dec. 2, 2020.  He rejoins his beloved wife of 62 years, Ellie (Jenkins), who passed away in January.

Born in Boston, he was the son of the late Patrick and Rita (Malcolm) O’Rourke.  Bill was raised in Jamaica Plain and graduated from Boston Latin High School and the University of Massachusetts at Amherst with a BS in Mathematics.

After college, he spent three years in the Air Force, starting with the pilot training program and transitioning into computer software development. He later went on to a successful career working for General Electric, Honeywell, and other companies.

He cherished most the role of husband, father and grandfather and he will be sorely missed by his family. Bill enjoyed tennis, swimming and traveling with family. Bill was an avid reader and was forced to switch to audio books when his eyes started failing him.

Due to the Covid-19 pandemic, all services will be private. He will be buried in the Southborough Rural Cemetery.

In lieu of flowers, we ask that you consider donating to either the Talking Book Library at the Worcester Public Library at talkingbook.mywpl.org or the Perkins School for the Blind at perkins.org.

Arrangements are under the care of the Morris Funeral Home, 40 Main St., Southborough.