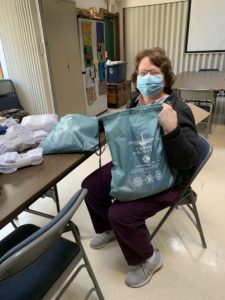 Marlborough – While the members of Marlborough’s St. Stephen Lutheran Church could not gather in person this year to knit as a group or assemble gift packages, they worked together – while apart to make sure that a group of merchant marines will receive Christmas presents. This is the fifth year the church has participated in the Christmas-at-Sea initiative of Seafarers International House, collecting and knitting items for those who will be out to sea over the holidays.

In the first year of participation, Saint Stephen sent five kits; the second year they doubled their efforts and sent ten; the third year they put together 15 kits. Last year and this year they collected and packaged 20 kits that will be Christmas gifts.

Members of the Knit Wits group created warm hats with coordinating scarves, while the Greeting Card ministry made Christmas cards. Others donated items and money for the 20 satchels that were packed with heavy, hooded sweatshirts, thermal socks, chocolate bars, and nuts. Coordinating the project was Melanie Whapham of Marlborough. When all items were collected, Melanie and Jane Woolsey assembled the final satchels, which were shipped to the Seafarers ministry in Connecticut for distribution. This was also a Thrivent Action Team project. The seed money awarded by Thrivent, a financial services company, was used to purchase some of the sweatshirts.

Seafarers are often isolated and lonely, sometimes without the means to regularly contact family or purchase needed items while in port. Typical contracts put most at sea for 10 months a year, and they remain a largely forgotten population at the holidays.

Seven Lutheran chaplains support the Seafarers Port Mission. When requested, they will board merchant marine ships to provide pastoral care and counseling. During the holiday season chaplains distribute the packages to ships that will be out at sea for Christmas, boarding ships that port in New York, New Jersey, Baltimore, Philadelphia, and southern New England.

This past holiday season, a record 2601 crew members regardless of faith or nationality, received satchels. Seafarers International House is an ecumenical mission of the Evangelical Lutheran Church in America to seafarers and sojourners, as well as people who are distressed, disadvantaged, and displaced. For more information, visit: https:/www.sihnyc.org.

For more information about the church, visit www.saintstephenlutheran.com or the church’s Facebook page. Saint Stephen is a member of the New England Synod of the Evangelical Lutheran Church in America (www.elca.org). The church is a Reconciling in Christ congregation, inviting people of every gender, sexuality, race, ethnicity, ability, marital status, or class. Parishioners come from Marlborough, Hudson, Berlin, Northborough, Southborough, Westborough, Shrewsbury, Sudbury, Stow, and Bolton. Zoom church is held Sundays at 10 a.m.