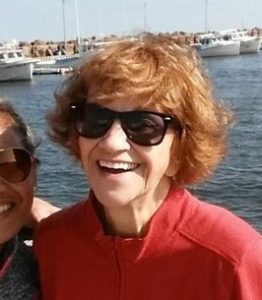 Leona grew up on a rural farm with no indoor plumbing or electricity, which was on Renaud Road, near a small fishing village, Saint-Edouard-de-Kent, New Brunswick, Canada. Here, Leona and her siblings, children to the late Eric Renaud and Adele (Thibodeau) Renaud, attended a two-room school where they learned to read and write in French and English.

As a young woman, Leona relocated to Saint Stephen where she found work as a seamstress. Later, Leona immigrated to Leominster, Mass. to be near her uncle’s family. She soon found employment at Cluett Peabody & Co. shirt factory making Arrow shirts.

In 1953, on Valentines Day, Leona and her cousin went to a Saturday night dance where she met her husband-to-be, Edward W. Maynard. For Ed, it was love at first sight. They became engaged, and on Aug. 24, 1958, they were married in at St. Rose of Lima Parish in Northborough.

Ed and Leona then relocated to Washington, D.C. and then Maryland where Ed worked as a police officer with the Washington D.C. Police Department. Here they resided for 43 years, where they made their home and raised their two sons. Ed and Leona both retired in 1998, moving to a cottage on Cold Stream Pond in Enfield, Maine. In 2012 they moved to their current home in Lewiston, Maine.

Leona was a beautiful person whom all loved. She was a jack of all trades and could tackle any job. She waitressed, sewed, provided wonderful meals and treats, tackled yard work with pride, gardened, played piano and was enjoyed styling hair for friends and family.

For several years she drove a school bus for the Prince Georges School System to ensure quality college education for her sons. Leona made her house into a welcoming home. She was a devoted wife, loving mother and doting grandmother. She will be missed by all lucky enough to have known her.

In addition to her husband Edward, Leona leaves her two sons, Thomas E. Maynard and his companion (Leah Bisson-Szotkowski) of Lewiston, Maine and Eric J. Maynard (Carla) of Pasadena, Md.; a granddaughter, Ashley M. Maynard of Brunswick, Md.; and a great-grandson, Addison J. Maynard.  She also leaves her brother, Aldeo Renaud (Marie-Reine) of  New Brunswick, Canada, and several nieces and nephews, André and Denis Renaud, Andrea Leblanc, Denise Hebert, James Trites, France and Isabelle Renaud, all whom reside in Canada. Leona was preceded in death by her sister, Alda Trites (Kenneth), and her three brothers, Aubrey, Cleophas (Edith), and Albert, as well as a niece and a nephew, Donna and Claude Renaud.