Westborough – Clementine Bihiga is an accomplished independent certified coach, teacher, trainer and speaker with The John Maxwell Team. In 2014 she received her master’s degree in public health administration with a concentration in health/health care administration/management.

All of this alone would be impressive enough. But when one hears the details of Bihiga’s story, one that began in war-torn Rwanda, her accomplishments are truly remarkable.

Bihiga was featured guest speaker at the Business Forward Females (BFF) program of the Corridor 9/495 Regional Chamber’s virtual meeting Dec. 8. Although her story was a difficult one to listen to, the members attending the presentation were visibly moved and grateful that they had the chance to listen to her.  Indeed, Bihiga who has every reason in the world to be bitter, scarred and angry, is instead gracious, positive, empowered and strong.

At the age of eight, Bihiga and her family were forced to flee their home in Rwanda due to the genocide and civil war of 1994. Members of the Hutu ethnic majority murdered as many as 800,000 people, mostly of the Tutsi minority. Millions more, like Bihiga’s family, ended up in refugee camps in the Congo (then Zaire) where again, the young girl witnessed death every day.

“I was afraid to go to sleep, because I was afraid I wouldn’t wake up,” she said. “People were just dying all around us.”

Adding to the horror was a nearby lake that was the only source of water but was also where the numerous dead bodies were thrown.

The family then moved to a refugee center in Kenya. There police routinely abused and kidnapped refugees instead of protecting them.

After five years they then relocated to the United States. But this too brought hardship.

“It was the worst time of my life…I was bullied all the time,,,I was bullied for just being alive…for being me,” she said.

Bihiga got through high school and found happiness in college, marriage and then pregnancy. But then once again, tragedy struck when she lost her unborn baby daughter, Clarette, at seven months.

She decided to use her heartbreak to help other children, starting the Clarette Refugee Fund which provided school supplies, uniforms, and food for refugee children in Kenya.

“I chose to get up from my struggle and share my story,” she said. “The fund was formed out of brokenness. There’s always something we can learn from our struggles.’

In the ensuing years, Bihiga had two sons. Although now divorced, she is happier than ever, she said. She continues her advocacy work, has written a best-selling memoir, “Happily Broken: Discovering Happiness Through Pain and Suffering” and has spoken to numerous groups about her journey. She has received many honors for her work, but remains humble, and committed to helping others.

“Life is what you do for others,” she said. “And there are no mistakes that we are here, we are all masterpieces.” 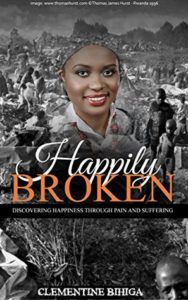 Scrubs with Style gears up for the holiday season