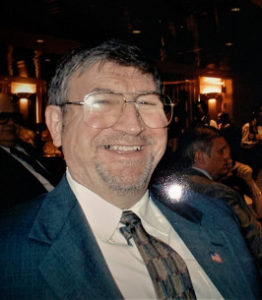 Dick was born in Greenwood, Arkansas on December 14, 1937, the youngest of seven children to John and Eva Desper. He was raised in Taylorville, Illinois and even at an early age began to up excel at math and science. After his high school graduation Dick studied at the Massachusetts Institute of Technology (MIT) where he earned a bachelor’s degree in chemical engineering. Dick continued his education achieving a Doctor of Philosophy in chemistry from the University of Massachusetts Amherst. While working on his doctorate degree, he met fellow chemistry student Beatrice Smith. They soon married and had five children.

Dick later divorced and married Laura Taylor. Dick and Laura enjoyed 32 years of marriage together. Dick enjoyed a long retirement after spending his career working for the U.S. Army. Dick and Laura joined a local real estate company where they enjoyed working together as part of the sales team.

He enjoyed researching Shakespeare and participating in the Oxford Society, keeping up with world politics, trips to the beach, eating out, watching movies and spending time with his family and friends. He was a longtime member of the Acton Congregational Church where he found purpose in many volunteering opportunities within. Dick enjoyed trivia and even tried out for Jeopardy. He was an avid football fan and loved his dog Buttons.

Due to the current restrictions in place due to Covid-19, all services for Dick were private, for the family.

Arrangements were under the care of Hays Funeral Home, 56 Main Street, Northborough, MA.