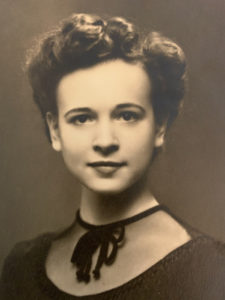 Born in Marlborough on Dec. 6, 1926, she was the daughter of Georgiana Courville and Marcel Lemire. Yvonne was the youngest of four children and graduated from Marlborough schools Ecole Saint-Antoine with distinction in 1940 and in the Commercial course of study at Marlborough High School with Minor Honors in 1944. After graduation and during World War II, Yvonne followed her sister, Gloria, to work at the Pentagon in Washington, D.C.

After the completion of World War II, Yvonne married the love of her life, high school sweetheart and Army Air Corps aviator, Alden Herbert Kane, on June 8, 1946. Together they raised their eight children, five boys and three girls, in Hudson, where they resided for close to 55 years.

Yvonne was a member of Saint Michael’s Church, and assisted her husband in their early years together with his family’s business, then F. J. Kane and Sons. She and her family enjoyed flying their various airplanes throughout New England and the East Coast, spending summers on Lake Boon in Stow and in Falmouth on Cape Cod in later years. She shared a lifelong enjoyment of playing the piano and being with her family who were her greatest joy.

Yvonne is survived by her children and their spouses, Jeffrey Kane of Marlborough, Martin Kane of Hudson, Michael Kane and Lois Wikstrom of Bolton, Kevin and Anne Kane of Hudson, Daniel and Ghaida Kane of West Bloomfield, Mich., Dr. Maureen and Charles Steele Jr. of New Canaan, Conn., and Adele and Jeffrey Hill of Stow; her grandchildren, Christopher and Emma (Martin), Meghan Bride and Katherine Cleland (Kevin), Sarah, Alden and Grace (Daniel), Annelise, Charles III, Christina and Jacqueline Steele (Maureen), and Matthew, Andrew, Timothy, and Michael St. Denis (Adele); and her great-granddaughters, Maryanne and Carolyn (Meghan), and Aislinn (Katherine). She was predeceased in life by her husband, Alden, in 1999 and their daughter, Janice, in 1990.

Her kind heart, compassion, and devotion to her family will forever be so greatly missed.

A private family service was held.

The family would like to acknowledge the great support and companionship of Jeffrey to our mother in the years following her husband’s passing. Jeffrey’s devotion was unwavering.

The family makes two suggestions for memorial donations: Notre Dame Long Term Care Center, 559 Plantation St., Worcester MA 01605, for their “Courtyard” where she and her family enjoyed the outdoor sanctuary in her later years, or a donation of one’s choice, or performing random acts of kindness for unsuspecting others.