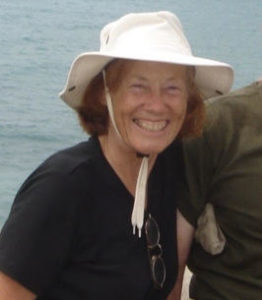 Barbara Hahn Roberts, of Holden, passed away peacefully at home Dec. 30, 2020, surrounded by her loving family. She was 78 years old.

Barbara was born in Cincinnati, Ohio on May 15, 1942, and raised in Northborough, a daughter to Robert Simpson and Helen (Shead) Hahn. She married Arthur Adams Roberts and together had two children, John Arthur Roberts and Jennifer Hahn Roberts. Barbara and Arthur have six grandchildren and two nephews.

Barbara graduated first in her class from Bancroft School in Worcester, Massachusetts in 1960. She went on to graduate from Clark University with a BS in mathematics, where she was 7th in her class among women and made Phi Beta Kappa, Sigma Pi Sigma, and other honor societies. After graduating from Clark University, she went on to graduate schools, including George Mason University (MS). In her master thesis, she solved five unsolved math problems. She then went on to Virginia Tech (ABD) and WPI where she earned a MSEE and a MS CS.

Barbara worked as a middle school math teacher, a high school teacher, an interim college professor, and math professor at Northern Virginia Community College. She left academia to work at Goddard Space Flight Center, working on the Delta project to plan astronomy missions for the shuttle. It was then that her boss told her she had solved an unsolved orbital mechanics problem. She then went to work for GTE in Westborough, MA, where she worked on C3 for the MX missile. When GTE in Westborough closed, she went to work for Mitre Corporation and was admitted to Who’s Who of Women in Engineering and Science. She was a senior member of IEEE and published a number of articles on the results of her simulation work. Prompted by the events of September 11, 2001, she decided to work in the intelligence arena where she served as Principal Engineer.

Barbara liked sports as a young person, playing soccer for Bancroft. She played tennis for a number of years. In her later years, she and Arthur sailed their boat, Badger, along the East coast of the United States. They then shipped the Badger to Europe where they sailed for about 10 years to Turkey, Greece, Malta, Italy, France, Spain, England, Belgium, the Netherlands, Denmark, Germany, and Sweden. Barbara also published a number of sailing stories in the Vancouver Association magazine.

Barbara was a visual artist and liked realistic works, but she did try her hand at abstract painting, as well. She took art and writing classes at the Worcester Art Museum (WAM) in her retirement. She had a number of group and single art shows to benefit the community. The most recent was hosting a gallery at Briarwood. She was chosen to be Artist in Residence at WAM during the Syrian war, working with local Syrians to help the greater community understand the war. Barbara was also chosen to document WAM’s first swearing in of new American citizens. Barbara held a show on homeless people at Assumption College, where she raised hundreds of dollars for the Catholic Worker House and the Mustard Seed, special charities that she liked to support.

Barbara and Arthur stood Peace Vigil with Scott Schaffer-Duffy in Lincoln Square for many years. They worked as activists to try to end the wars in the Middle East.

Barbara also graduated from the WCCA-TV producer’s class and went on to be Producer of the interim TV show “Racism: We can do without it.” Barbara greatly enjoyed taking ukulele lessons with her grandson after he graduated in music from VCU, as well as visiting with all of her grandchildren during her and Arthur’s many road trips and adventures.

Barbara will be laid to rest privately in Howard Street Cemetery in Northborough. The Roberts family respect, in lieu of flowers, that you give of your time for the cause and benefit of others. Memorial donations may also be made to a charity of your choice.

Arrangements have been entrusted to Hays Funeral Home, 56 Main St., Northborough. To share a story or to leave a condolence for Barbara’s family, please visit www.HaysFuneralHome.com.