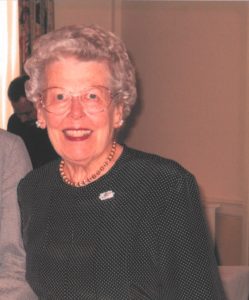 Shrewsbury – Carolyn Demarest Wells, 90, known to family and friends as Demmie, died Jan. 9, 2021 at Rose Monahan Hospice Home in Worcester. She was born in Baltimore, Md. on July 2, 1930, the third daughter of Marguerite Bahlke Demarest and Clayton Demarest, Jr.

Mrs. Wells was a graduate of the Roland Park Country School in Baltimore and Wellesley College in 1952 where she majored in French Literature and minored in Bridge. She and her husband, John (Jerry) Shippen Wells were married July 17, 1952.

Mrs. Wells is survived by her husband; her daughter, Elizabeth Wells Moir and her husband Bruce; her son, Eric Demarest Wells and his wife Nancy Tivenan; three grandchildren; five great-grandchildren; and several nieces and nephews.

Mrs. Wells was a member of the Daughters of the American Revolution and the Daughters of Founders and Patriots of America. She proudly wore her American flag pin every day. She volunteered for a number of local organizations and served as a trustee of Worcester Children’s Friend.

A memorial service will be held at a date to be determined. There are no calling hours.

Arrangements are in the care of Callahan Fay and Caswell Funeral Home.