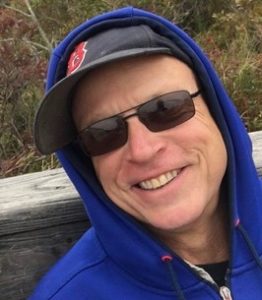 Shrewsbury – On Monday, Jan. 4, 2021, Jody B. LaPierre passed away peacefully at his home after a valiant fight against cancer; he was 64 years old. At the time of his passing, he was surrounded with the love of his family.

Jody was born in Palmer, the youngest of four children to the late Joseph T. and Roberta (Kenwood) LaPierre. He was a graduate of the former Worcester Boy’s Trade High School and had a successful career in operations as a facility maintenance technician for several companies. His dedication to this profession over the years was essential in keeping those companies running. He was the go-to guy and could fix any problem. His work ethic and extensive knowledge was respected by all. He was indeed a great man.

A cabinet maker by trade, Jody was a master at his craft, but his talents extended far and wide. Jody was constantly working on side jobs, fixing up furniture found on the side of the road or refinishing pieces brought to him by friends. When he wasn’t working on a specific project, you could find Jody puttering in his workshop getting creative or clearing space for his next work of art. There was nothing Jody couldn’t make or spruce up, and many people are lucky enough to have his handy work displayed in their homes. His own home is filled with original pieces and refurbished antiques that will forever remind his family how amazing and talented he was.

In 1984, Jody married his bride, Nancy “Nellie” Louise (Earle) LaPierre. Together they celebrated 36 wonderful years of marriage this summer. On any typical day throughout their lives they could be found filling their leisure time outdoors cleaning up the yard, or working together to fix things around the house. They were inseparable and always side by side. They raised two children together and made a second home for themselves in Wells, Maine where the family would spend summers together to this day. Time in Maine was spent enjoying the company of friends, riding bikes to the beach, and cracking jokes around a campfire.

If you knew Jody, you were no stranger to his witty sense of humor and his unforgettable laugh. Even if you didn’t know Jody, you have probably heard his laugh, because it was honestly that loud. His spirit, sense of humor, and genuine interest in others made him so easy to talk to. He made you feel as if you had known him all your life, even if, in reality, you had only met him that afternoon. He was honest and sincere, and would always remember a name.

Like many others, Jody’s life ended too soon, but in the time he was here he was able to experience a life so beautiful. He was able to enjoy an idyllic marriage to the woman of his dreams, a woman he loved so deeply and always will. He was able to watch his children grow into adults, and root them on as they achieved their dreams. He was able to experience what he called his favorite birthday ever cruising out to Catalina Island in California, on the boat his son owned and captained. He was able to walk his daughter down the aisle at her wedding, while she wore the same dress her mother did when Jody married her 36 years ago. Jody was a remarkable man, and will never be forgotten. His legacy will live on through his friends and family, and through the memories and laughs he helped create.

Jody will be missed and remembered by his wife, Nancy; by his son, Cody LaPierre of Marina Del Ray, Calif.; by his daughter, Sadie Ernst and her husband Christopher of Boiceville, N.Y.; and his sister, Corinne Martin of Boylston. Jody was preceded in death by his two brothers, Randall LaPierre and Robert K. LaPierre.

Jody’s family has decided all current services will be private, for their family. At a future date, a Time to Gather and Celebrate Jody’s Life will be announced so all may join to gather and remember Jody.

The LaPierre family respectfully request that in lieu of flowers, memorial contributions to the Dana Farber Cancer Institute (www.dana-farber.org) be considered.

Arrangements have been entrusted to Hays Funeral Home, 56 Main St., Northborough. To leave a condolence, or to share a story, please visit www.HaysFuneralHome.com.