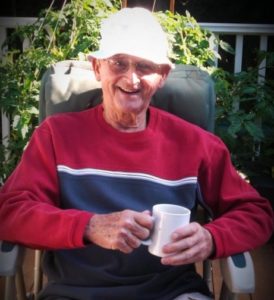 Paul was born in 1928 to Joseph Jacobs and Alice (LaFoley) Jacobs. He was one of the younger boys in the large Jacobs family of 16 children. He was a graduate of Hudson High School, class of 1946.

Following high school Paul went off to serve in the Navy at the end of World War II. He later worked as a lithographer in Worcester and then at Atlantic Business Forms in Hudson. He retired from Digital as the landscaper and innkeeper for the West Boylston and Littleton Conference Centers.

Paul lived at the family homestead his entire life. He married the girl of his dreams in 1956 and together raised their two daughters there. And although it changed over the years, he continued to love the home where he grew up. He especially loved sharing it with his family. Paul continued to garden, feed the birds and build fieldstone walls on the property right up into his 90s. He was a quiet man who loved to spend time with his family, work in his garden, and play with his beloved dog Jake.

He never missed an event when it came to his daughters and grandchildren. He was an avid cheerleader for all their endeavors, whether it was the arts, school or a sporting activity.

Paul enjoyed many adventures with his loving wife, Terry. In their retirement, they travelled around Europe and took a motor trip across the United States. They also spent many winters with friends and family in Venice, Fla.

Paul leaves his wife of 64 years, Therese “Terry” (DesRochers) Jacobs of Hudson; two daughters, Lisa Pacific and husband Paul of Marlborough and Paula Baran and husband David of Hudson; five grandchildren, Jacob Pacific of Berlin, Julie Martin and husband Donald of Westbrook, Maine, Jessica Stier and husband Matt of Hudson, Jim Baran of Hudson, and Nate Baran of Worcester; and his sister, Beverly Loureiro of Connecticut. Paul was predeceased by 14 brothers and sisters.

Paul’s family would like to express their sincere appreciation for the loving care provided by the staff of VNA Hospice while at home as well as the dedicated staff at the Rose Monahan Hospice House in Worcester.