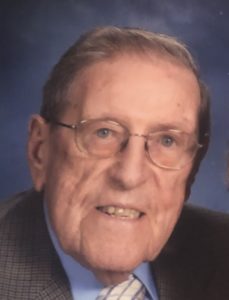 Westborough – William A. “Bill” Henderson, 100, of Westborough, passed away peacefully at home Jan. 17, 2021, with his loving family by his side.

He was the loving father to David and his wife Carla of Mamaroneck, N.Y. and to Nancy (Henderson) Federici of Westborough, and cherished “Papa” to his five grandchildren, Nicole and Andrew Federici, and Lauren, Julia, and William Henderson. He was the beloved husband of Vilma, to whom he shared 67 wonderful years of marriage and who predeceased him by only eight weeks. He was also predeceased by his parents, William and Gertrude (Nolan) Henderson, and his younger brother, Rev. Paul B. Henderson, C.S.S.R..

Bill was born and raised in Boston and graduated from Boston College High School at age 16. He grew up in an affluent Irish Catholic family, as his father was boxing manager to Jack Sharkey, World Heavyweight-Boxing Champion.

At age 16, when his father became ill, he was designated “Head of Household” and took his first job with Mass Bonding Insurance Co, working for “Honey” Fitzgerald, father of Rose Fitzgerald Kennedy. In what would be unheard of today, he built a successful career as an accountant working for one company his entire life. Mass Bonding later became Hanover Insurance and he worked his way through the ranks to retire as company Treasurer.

Head of Household designation made him undraftable by law in WWII, but he served his country by running Boston businesses left behind by servicemen gone to war. Most notably, he ran “Mac’s Bowladrome” on weekends, located across the street from the now infamous Cocoanut Grove Nightclub. At the time of his passing, he remained one of the oldest living eyewitnesses to the 4th worst fire in the history of the U.S.

As a devout Irish Catholic on Mission Hill, he grew up and spent much of his early life attending and serving Mission Church, the Basilica of Our Lady of Perpetual Help. Here, he joined the Knights of Columbus, and was Grand Knighted to the 4th degree with two notable people: his acquaintance “Jack,” known to most as John Fitzgerald Kennedy, the 35th President of the U.S. and with his friend, Cardinal Richard Cushing, former Archbishop of Boston.

His Catholic faith was also greatly influenced by his “Uncle Joe,” former Bishop Joseph Dinand, past President of the College of the Holy Cross. Bill’s father, William, and Bishop Dinand were raised as brothers by Bishop Dinand’s mother, Julia (Looney) Dinand, after Bill’s grandmother passed. They were sisters.

Bill was also an avid poker player, and enjoyed weekly Tuesday night games in the Mission Church basement, where he could often be found playing with his good friend “Mossy,” former Massachusetts Governor Maurice Tobin.

While working at Mass Bonding, he met the love of his life, Vilma, and they wed in June 1953 and enjoyed 67 wonderful years of marriage. Their marriage led Bill to become an “adopted” member of Vilma’s loving extended Italian family.

They bought their first home in Needham and relocated to Chatham, N.J., to be nearer to work in NYC. In 1970, they relocated back to Massachusetts, and settled in Westborough where they raised their family.

They enjoyed traveling and took trips that included Italy, Bermuda, California, and Puerto Rico to frequently visit his brothe,r Paul, who was stationed there as a priest. They spent winters in Vero Beach, Fla. Their life was rich, always surrounded by wonderful family and friends. Above all, their greatest love was spending time with their children and grandchildren, whether at home or in Falmouth, on Cape Cod.

Bill was an avid sports fan his entire life, routing for all teams Boston. His greatest love was baseball, first rooting for the Boston Braves, then later, the Red Sox. He enthusiastically watched every game and when they weren’t playing, he’d watch the Yankees to root against them. He enjoyed candlepin bowling and played in many leagues while working for Hanover. He was also an avid golfer playing for years at Westborough Country Club, proudly hitting a hole in one on May 22, 1986 on the 7th hole.

Bill loved music and played the saxophone and clarinet, but his greatest love was playing the organ and in retirement, he’d perform recitals weekly with his organ group. He loved reading, and enjoyed a daily glass of wine, but he was most devoted to his Catholic faith. He was a communicant of St. Luke the Evangelist Church where he was an active member of the parish, serving as an usher at the 9 am mass for years, an altar server at funerals, and many other ministries. In retirement, he served as a greeter for Pickering & Son Funeral Home.

Due to Covid-19, funeral services and burial will be private. A celebration of Bill’s life will be held at a later date when we are able to come together and gather.

In lieu of flowers, the family asks that charitable contributions be made to St. Luke the Evangelist Church Memorial Fund, 70 West Main St., Westborough, MA 01581.