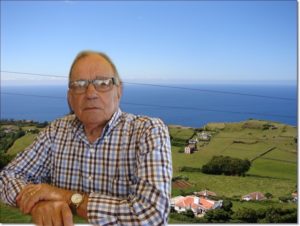 Hudson – Alberto S. Chaves, 86, of Hudson, MA, passed away peacefully on Thursday, January 28, 2021 at Marlborough Hospital, after a period of declining health and a brave battle with covid19. He leaves behind his beloved wife Ermelinda (Rego) Chaves.

Alberto was born in Santa Maria, Azores, Portugal on March 13, 1934, a son of the late Francisco and Filomena (Sousa) Chaves. He was raised in Santa Maria, where he attended school and later married his beloved wife Ermelinda. Alberto immigrated to Hudson in the 90’s, where he still resided when he passed. He was a longtime member of Saint Michael Parish in Hudson. Alberto worked for many years as an assembler at ACT, manufacturing wiring and cables. True to his Azorian heritage, Alberto enjoyed fishing, eating seafood and drinking a glass of fine wine. He was a loving husband and a great father and grandfather. He will be dearly missed by his many loving friends and family.

A Graveside Prayer Service will be held at 12:00 p.m. on Wednesday, February 3, 2021 at Forestvale Cemetery on Broad St. in Hudson.

In lieu of flowers Alberto would like for you to enjoy a nice meal and raise a toast in his memory.