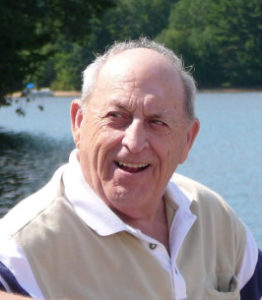 Shrewsbury – Edward N. Willette Sr., of Shrewsbury, formerly of Northborough, passed away peacefully in his sleep Jan. 29, 2021. He was 89 years old.

Ed was born in Worcester, the son to the late Joseph E. and Viola (Prevost) Willette. He spent his early years in Grafton prior to his family relocating to Northborough. Ed was a graduate of Northborough High School and Worcester Boy’s Trade. Soon thereafter he enlisted in the U.S. Army where he proudly served his country during the Korean War.

After his honorable discharge from the service Ed was a dedicated employee of 25 years at the New England High Carbon Wire Company in Millbury. Once retired, Ed and his wife, the late Rita B. (Bonin) Tebo Willette, moved to Indio, Calif. where they resided for 14 years. In 1995, they returned Shrewsbury to be closer to family.

Ed was a true New England sport team enthusiast, most especially the Bruins, Patriots and Red Sox. He was a longtime supporter of Northborough Youth Hockey and a former member of its board of directors. He enjoyed Bingo and was a longtime member of Saint Rose of Lima Parish in Northborough. Family was special to Ed. He looked forward to spending time with his children and grandchildren. Making memories with his family while vacationing every summer in Dennisport and following the grandchildren’s many activities were some of Ed’s favorite pastimes.

A Mass of Christian Burial will be celebrated Saturday, Feb. 6, at 10 a.m., in the Saint Rose of Lima Parish of Northborough. Burial with military honors will follow in Howard Street Cemetery. All current Massachusetts covid19 guidelines and gathering restrictions will be followed; please plan accordingly. There are no public calling hours.

In appreciation for the wonderful care they provide, memorial donations may be made to the

Arrangements are under the care of Hays Funeral Home, 56 Main St., Northborough. To leave a condolence or to share a story, please visit www.HaysFuneralHome.com.