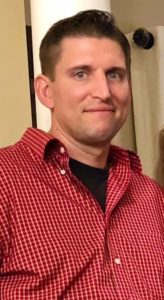 Shrewsbury – Mike Michalak was born with music in his soul and it’s often said that where words fail…music speaks. His love and interest with music and the many instruments he mastered began with playing trombone with the high school band. He played the piano, keyboard and drums as well, but his true passion and talent shined when he had any one of his many guitars in hand. His Nana, Barbara, gifted him his first guitar at age fifteen and he never stopped playing.

He later took this love to a new level and created his own recording studio ‘Console Recording Studio’ as well as Creative Concepts in which he taught guitar to aspiring musicians and students. In addition, he worked with his uncle and cousins at Commonwealth Electrical Technologies in Worcester.

Mike had more than just a love for music as he was a real history buff with a keen interest in the world wars and the men who led them. A talented artist, Mike had a real gift with his ability to draw. He was always the first in the water when at the beach, but it wasn’t just the ocean and swimming that drew him towards the water. He earned his scuba certification at age fourteen in Gloucester and loved fishing, crabbing and walking the beautiful beaches on the Cape especially Dowses Beach in Osterville and Marconi Beach in Wellfleet.

Michael George Michalak was born March 15, 1981 in Worcester, a son of Diane L. Michalak. Born an only child he was very close to his Duquette cousins whom he considered more than family but equally close as friends. Raised in Shrewsbury he was a graduate of Shrewsbury High School with the class of 1999.

Mike played hockey all his life and was a part of the first ever winning team as defensemen for Shrewsbury High School when they won the state championship in 1999. He attended Bryant University and later Middle Tennessee University. He also attended and received certification from Berklee School of Music in Boston.

While he always considered Shrewsbury home he had lived in Nashville (before it was hip and cool) as well as West Palm Beach, Florida.

Heaven reunites Michael with his grandparents, George S. Michalak (†December 12, 2012) and his grandmother, Barbara A. (Heron) Michalak (†August 23, 2017) and his aunt, Susan M. Duquette (†February 19, 2013). May they be supremely happy in their next life with one another and God.

Family and friends will honor Michael’s life by gathering for a calling hour on Thursday, Feb. 4, from 10:15 – 11:15 a.m., in Saint Anne’s Church, 130 Boston Tpke., Shrewsbury, followed by his funeral Mass celebrated at 11:30 a.m. Burial will follow in Mountain View Cemetery.

Those of you unable to attend may use this link on Thursday at 11:30 a.m. to participate in Michael’s services: https://my.gather.app/family/michael-michalak.