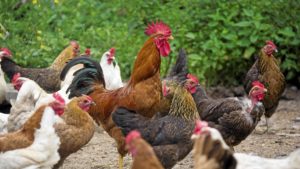 Westborough – An online public hearing on Thursday, March 4 at 6:30 p.m. will give residents the opportunity to weigh in on a proposed poultry bylaw. The bylaw is then slated to be brought before Town Meeting voters on May 15.

Animal Control Officer/Inspector Melinda MacKendrick explained that Westborough currently has no regulations regarding chickens, ducks and other poultry. A few residents complained to selectmen about the “noise, odor and filth,” as well as the excessive number of chickens in their neighborhoods.

Those concerns prompted the town to create the proposed bylaw.

As animal inspector, MacKendrick said that she checks barns and coops annually for census and estimated that Westborough has approximately 900 chickens. She noted that under state law, people must buy a minimum of six chickens at one day old. In any given year before May 1, the minimum number of ducks is 24.

She estimates that of the one-day old chickens, one in 10 are usually male, bringing Westborough’s rooster count to around 90.

MacKendrick said that it is difficult to enforce non-specific incidents but most residents try to keep their poultry in their own yards and have noise-proofing housing to adhere to 10 p.m. to 7 a.m. neighborhood quiet hours.

However, the proposed bylaw sets up specific standards that residents will have to meet within 18 months if they haven’t to date.

For example, the poultry has to be confined with fencing or a secure enclosure structure. Within an enclosure, a minimum of 10 square feet of open yard area is required per adult poultry.

Additionally, the structures or enclosures cannot be located within 250 feet of the high-water mark or any water flowing directly or any source of drinking water.

Other regulations focus on the numbers of poultry allowed per useable lot size.

Under one-eighth of an acre, six birds are allowed.

Eighteen birds are permitted with lots sizes between one-eighth and one-fourth of an acre while 24 birds are the maximum for one-fourth to one-half acre.

Thirty-six birds are allowed in one-half to one acre and 50 in one to two acres.

After three or more complaints, the animal control officer may order at the owner’s expense soundproofing material to be installed on the structure or enclosure; permanent removal of the nuisance birds; installation of fencing to prevent poultry from wandering into abutting properties; and request a nuisance hearing if mitigation measures fail to provide relief.