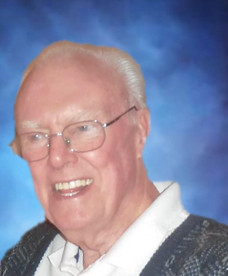 Hudson – Alan Knight Parker, 93, a lifelong Hudson resident, passed away peacefully on May 8, 2021 at Beaumont of Northborough, after a period of declining health. He is reunited with his beloved wife, Ramona M. (MacDonald) Parker, who predeceased him on Oct. 27, 2018.

Alan was born in Waltham on July 29, 1927, a son of the late Lloyd L. and Arline (Knight) Parker. He was raised in Hudson and attended Hudson High School, where he served as a class officer along with the love of his life Ramona. Alan graduated with the class of 1945 and subsequently served his nation as a Seaman 1st Class, United States Navy, aboard the USS Cascade in the Sea of Japan at the close of  WWII. Shortly after returning home from service he and Ramona were married on January 29, 1950, sharing the next 68 years in Hudson together, raising their family.

Alan chose a career in his family’s lumber business operating and later owning Larkin Lumber Company in Hudson for many years, before eventually retiring.

Alan was very actively involved in the Hudson community, serving as a Corporator and later as a member of the Board of Directors of the Hudson Savings/ Avidia Bank for many years. He was also a longtime member of the Hudson Masonic Lodge and a volunteer relief firefighter with the Hudson Fire Department for 27 years.

Alan and Ramona loved to travel together taking many wonderful trips with the Golden Timers of Hudson Savings Bank. They also enjoyed annual trips to Sanibel Island and Cape Cod. They were avid birdwatchers and especially enjoyed summer camping trips with their children to the Audubon Sanctuary in Wellfleet.

Alan lived an extremely active lifestyle well into his 80s; over the years, he enjoyed gardening, golfing and candlepin bowling in local Leagues. Alan also enjoyed spending time and sailing at their family camp at Lake Boon in Hudson throughout his life. A devoted family man, Alan most cherished the time he spent with Ramona, his children, his grandsons, and his great-grandchildren.

Relatives and friends are invited to a Graveside Funeral Service at 11am on Saturday, May 15, 2021 at Forestvale Cemetery on Broad St. in Hudson. Tighe Hamilton Regional Funeral Home is honored to be assisting with his arrangements.

In lieu of flowers memorial donations may be made to a charity of the donor’s choice in memory of Alan K. Parker.