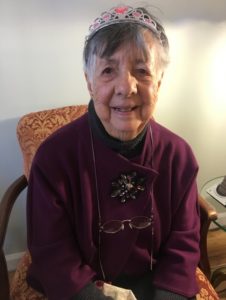 Hudson – Anne Loretta (Byron) Gardner, 92, of Hudson, who had led a spirited life until a series of recent strokes, died on May 10, 2021 at the Branches of Marlborough under the care of Metro West Hospice.

Anne was born Feb. 19, 1929 to Harry and Katie (Cronin) Byron, the youngest of the four indomitable Byron sisters of Byron Street, Hudson. Anne liked to say she was born the year the stock market crashed, and the Byrons suffered many of the same deprivations of other families during the Great Depression, but Anne, or Beansy as she was affectionately called, grew up in a lively household. Beansy joined her sisters Clare, Barbara and Jean in a keen intelligence, sense of humor, style, and athleticism. When the Byron sisters “came down the Pike,” you knew it.

Anne enjoyed a 29-year career at St. Vincent Hospital as a phlebotomist, Med Tech II, and then supervisor of St. Vincent’s Blood Bank, retiring in 1988 to help her sisters care for their mother Katie.

Anne was a devout Catholic with a deep personal faith, and a congregant at the local parish wherever she resided.

Anne was the first ever triple champ in the annual Riverside Tennis Club tournament winning all three divisions in 1958: singles, doubles, and mixed doubles, with her wooden Davis Tad racket. Richard (Dick) Gardner, who had recently taken up the sport, must have been impressed with her wicked backhand, as they were married January 18, 1959 in St. Michael’s Church, Hudson.

Anne and Dick brought up their family of six children in Marlborough for 37 years. Though Anne hung up her tennis racket in order to raise her kids, she was a fierce fan of their athletic endeavors and may have had a polite word or two with a ref or umpire over the years. She was also the reigning ping pong champ of the entire extended family at annual Thanksgiving and Christmas gatherings.

After family life of the annual week vacation to Hampton Beach, N.H., hundreds of hockey and soccer games, dance recitals, and assorted pets, Anne and Dick retired to Hampton, N.H. in 1995. Anne cherished being a grandmother during her retirement years and she was immensely proud of and interested in the lives of her seven grandchildren. She especially loved holidays with her family.

In retirement Anne, an avid reader and lifelong learner, volunteered at the Hampton Public Library, where she was honored as the longest serving volunteer page, as well as the Medical Transportation and Bereavement Committees of Our Lady of the Miraculous Medal Church.

Anne was a lover of the arts, from music to dance, and she began painting lessons at an artist’s studio; several of her framed watercolors hang in her Hudson home. She was also a daily member of the Hampton Walker’s Club.

Her gaming spirit continued in retirement as a regular at the nickel’s table, and crack card player with Hampton friends, as anyone who ever went up against her in Texas Hold ‘em, Pitch, Hearts or even Rummy Cube will tell you. Anne was a serious Red Sox and Patriots supporter, taking a sharp interest in the pitching roster of the Sox and Brady’s moves on the field.

After 21 years of close friendships and active living in Hampton, including a bicycle trip in southern France, a tour of Ireland with a visit to her Cronin relations in County Sligo, an Eastern European river cruise, several provinces in Canada, an Alaskan cruise, Washington, D.C and state, and several winters in Florida, Anne and Dick returned to Hudson for the last 4 years of Anne’s life, where she reconnected with old friends, made many new, and participated in weekly nickels and “golf” card games.

On the occasion of Anne and Dick’s 50th year reunion of the Hudson High School Class of ’47, Anne wrote in the program as part of her letter to the class: “We are very lucky and grateful for our good life.”

Calling hours will be held on Sunday, May 16, from 2-5 p.m., at Tighe Hamilton Regional Funeral Home, 50 Central St., Hudson, with a funeral Mass celebrated on Monday, May 17, at 9 a.m., at St Michael’s Church, 21 Manning St., Hudson, and graveside service to follow at St. Michael’s Cemetery.

In lieu of flowers the family recommends donating to the public library of your choice in honor of Anne.