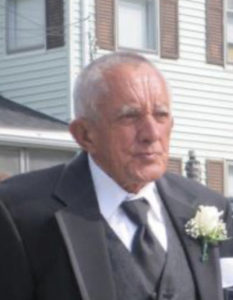 Hudson – Antonio C. Monteiro, 88, of Hudson, passed away peacefully, on May 11, 2021 at Marlborough Hospital, surrounded by his loving family. He is survived by his beloved wife of 55 years, Maria L. (Medeiros) Monteiro.

Antonio was born in Santa Maria, Azores, Portugal on March 23, 1933, a son of the late Jose Chaves Monteiro and Maria Reis (Braga Chaves) Monteiro. Antonio was raised in Santa Maria and later immigrated to Hudson, MA, where he has been a longtime resident. He worked for many years as a machine operator at Koral Company, before eventually retiring.

Antonio was a longtime member of Saint Michael Church in Hudson and also at the Hudson Portuguese Club. He was an avid soccer enthusiast and a diehard Benfica fan. Most of all Antonio loved spending time with his family, especially his many grandchildren.

In addition to his beloved wife, Maria L. (Medeiros) Monteiro, he is also survived by three children, Luis Monteiro of Hudson, Elizabeth Temple and her husband Kevin of Berlin, and Steven Monteiro and his wife Holly of Hudson; one sister, Elvira; one brother, Jose; eight grandchildren, Samantha, Cassie, Cory, Brianna, Ty, Tiffany, Adin, and Lexie; and many nieces and nephews.

Relatives and friends are invited to a period of visitation on Thursday, May 13, from 4-7 p.m., at Tighe Hamilton Regional Funeral Home, 50 Central St., Hudson. A funeral service will be held the following day on Friday, May 14, at 12 p.m., in the funeral home, followed by a procession to Forest Vale Cemetery for Committal Services. A memorial Mass will be celebrated at St. Michael Parish at a later date.