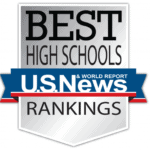 The annual list is compiled by U.S. News & World Report, which ranked roughly 17,860 public high schools in every state and the District of Columbia.

Shrewsbury High School is ranked 43rd in the commonwealth, 984th in the country and 58th among STEM (science, technology, engineering and mathematics) high schools.

“Congratulations,” Sawyer said. “That’s something all of us in our community should be very proud of.”

According to a U.S. News & World Report press release, the ranks were determined using state data from the 2018-2019 school year as well as data from the College Board and the International Baccalaureate.

Sawyer attributed the ranking not only to high school staff but to teachers in all grade levels.

“We can’t get results that are that strong without those foundational skills being taught from our students’ youngest ages,” Sawyer said.

Other local high schools appeared on the same rankings as Shrewsbury, with some having similar success.

“Certainly the quality of the program that we were able to provide, again has put Shrewsbury in an extremely favorable light when it comes to how our students perform compared to those across the entire nation,” Sawyer said.