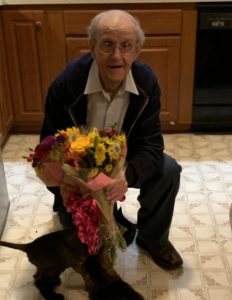 Marlborough – Erland A. Lind, 89, died peacefully at Marlborough Hospital on May 15, 2021 after a long decline in his health. He was four days shy of his 90th birthday. Only his brother, Maynard, and their mother, Freda, lived longer lives, both passing away at the age of 91. He was predeceased in 2018 by his wife of nearly 30 years, Dorothy Caso Payne.

He was born on a farm in Stockholm, Maine, on May 19, 1931, the son of the late William Swen and Freda Amanda (Adamson) Lind. He was predeceased by five of his six brothers and sisters, Edna W. (Lind) Browne, Verner Lind, Amelia (Lind) Juniewicz, his twin brother Elmer A. Lind, and Maynard Lind.

Mr. Lind worked many years as an electronics technician for the Polaroid Corporation in Cambridge after working for the Laboratory For Electronics and other local companies. He was a U.S. Air Force veteran of the Korean War, serving as an ambulance driver and EMT in Korea.  He could fix anything electronic that was broken, including the early televisions, and he often helped his sisters and brothers and their families.

He had a quick wit and wonderful sense of humor. He was a kind, warm, unassuming and kind person, who above all liked taking care of others, both people and cats. He was happy to be able to live out his life in his own home with his four cats, Heather, Heidi, PeeWee, and Kinsey, who kept him company and gave him warmth and affection during the difficult times of the pandemic.

In lieu of flowers, donations may be made to a GoFundMe fund called “Fund for Erland’s Little Cats” for raising money to help support his beloved little cats, pay for vet bills, and find them new homes. (Or email his niece, Nancy Browne at nrbrowne@live.com.)