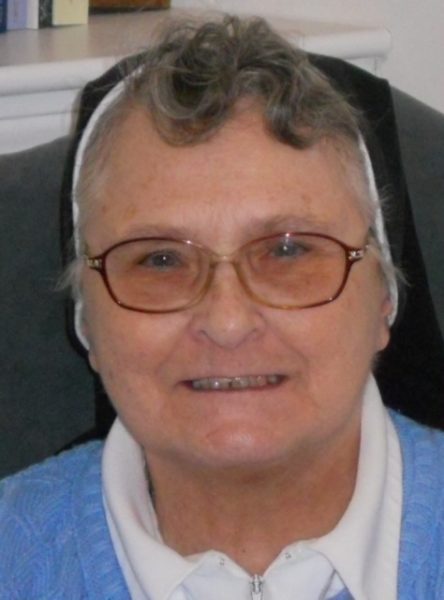 Marlborough – Sister Theresa Marie Stanek, RGS died on May 22, 2021 at Bethany Health Care Center, in Framingham after an illness. She was 79 years of age and had been a Contemplative Sister of the Good Shepherd for 57 years.

Sister Theresa was born on Aug. 28, 1941 in Binghamton, N.Y., the daughter of Paul Stanek and Mildred (Rich) Stanek. Sister graduated from St. Ann Institute in Albany, N.Y. and entered the Novitiate of the Contemplative Sisters of the Good Shepherd in Peekskill, N.Y. in 1964 where she began her formation and training in the life and ministry of the Contemplative sisters. Sister pronounced her first vows in 1967 and made her final commitment in 1972.

In 1968 Sister Theresa was missioned to the Contemplative Sisters in Huntington, N.Y. where she served in the Altar Bread Department. Sister returned to Peekskill, N.Y. in 1972 and for the next 14 years, she continued the work of the Contemplative community baking altar breads.

In 1986 she was missioned to a newly formed community of Contemplative Sisters in Trenton, N.J., generously giving of herself in community service. When this community closed in 2003, Sister was missioned to Wickatunk, N.J. where she continued her mission of prayer and service.

Sister Theresa went to Good Shepherd Center in Marlborough in 2015. Due to failing health, Sister was missioned to Bethany Health Care Center in Framingham in 2018.

Sister Theresa is survived by her sister, Patricia Morgan of Binghamton, N.Y.; her brother, Paul Stanek; her loving niece, Christine Rivers of Alabama; nieces Kathy Anderson and Debbie Stanek and nephew Leslie Stanek Jr.; and several grandnephews and nieces. She was predeceased by her brothers, Richard and Leslie, and sister Joanne.

Burial will be on Wednesday, May 26 at Mt. Benedict Cemetery in West Roxbury, with a graveside service at 11 a.m.

Expressions of sympathy in Sister’s memory may be made to the Good Shepherd Retirement Fund, 420 Hemenway St., Suite 466, Marlborough, MA 01752.