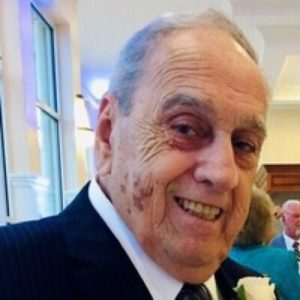 Shrewsbury – Patsy “Pat” Pecorelli, 90, of Shrewsbury, passed away peacefully on May 23, 2021 at Saint Vincent’s Hospital with his loving family by his side.

Pat was born in Worcester, one of seven children to the late Natale and Caterina (Bodinizzo) Pecorelli, and where he attended Sacred Heart Academy. He lived in Worcester most of his life until moving to Shrewsbury 15 years ago.

Pat worked as an operating engineer for the International Union of Operating Engineers Local 4 for over 30 years before retiring in the 90s.

He was a devout and faithful catholic and member of St. Mary’s Church in Shrewsbury and was previously a longtime member of the former Our Lady of Mount Carmel Parish. Pat attended daily Mass at St. Vincent’s Hospital Chapel and would arrive early to set up the alter every day.  After Mass, he would go visit his beloved wife Marie at the cemetery who he missed dearly.

He enjoyed serving as a rosary captain for America Needs Fatima and encouraged family and friends to pray the rosary.

To occupy his time, Pat loved to stay active and independent. He enjoyed spending winters in Florida with his daughter and summers on Cape Cod with his son, as his favorite pastime was spending time with family, especially his grandchildren. Pat possessed an infectious personality and built many friendships throughout his life. He showed astounding kindness and generosity to everyone who knew him.

Pat’s beloved wife of 62 years, Marie J. (Romano) Pecorelli, passed away on Nov. 25, 2014. He is survived by his son, Patrick J. Pecorelli and his wife Theresa of Andover; his daughter, Gina Brossi and her husband Louis of Naples, Fla.; two grandchildren, Patrick Brossi and his wife Danielle of Holden and Jason Brossi and his fiancé Richelle of Maine; and several nieces and nephews. Pat was predeceased by three brothers, Matteo, Michael, and Peter Pecorelli, and three sisters, Phyllis Loconto, Mary Montecalvo, and Victoria Ricci.

The family would like to thank Dr. Jang B. Singh and his staff for their exceptional care and compassion shown to Pat over the years.

Services for Pat will be held on Tuesday, June 1 from, 8-11 a.m., the Mercadante Funeral Home & Chapel, 370 Plantation St., Worcester, with a Mass of Christian Burial at 12 p.m. in St. Mary’s Church, 640 Main St., Shrewsbury. Burial will follow in St. John’s Cemetery of Worcester.