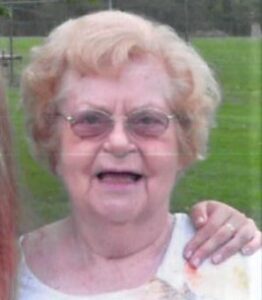 Northborough – Marguerite A. (Urbank) Auger, affectionately known by all as “Marge,” passed away in her beloved home of 68 years on June 2, 2021. She was 89 years old.

Marge was born in Providence, R.I., and raised in Northbridge, one of five children to the late Walter T. and Anna (McGaw) Urbank. During her teenage years Marge’s family relocated to Worcester where she completed high school at North High.

Marge worked several years as a telephone operator for AT&T & Ma Bell before devoting her time to raising her own family. Later in life she co-owned the former Country Vending of Northboro. She also worked several years as an administrative assistant in Algonquin Regional High School’s guidance department and then as an office administrator for the former Independent Cable Co in Hudson prior to her retirement in 1996.

For over 65 years Marge could be found at Sawyer’s Bowladrome where many friendships were formed and laughs shared. In addition to bowling, Marge enjoyed keeping active around town. She was a longtime volunteer and “shelf elf” at Northborough’s Public Library, was an active participant of Northborough Senior Center’s many activities and was a past lioness of the Northboro Lions Club. She enjoyed challenging anyone to a game of Cribbage and looked forward to following the Patriots. Marge was also a seasoned traveler and was proud of the many opportunities to cruise or tour the globe with friends and family.

Above all, Marge looked forward to spending time with her family and lifelong friends.

Marge is survived by her three children, Dian L. Rekowski and her husband Warren of Webster, Robert A. Auger of Worcester, and Judith G. Auger and her significant other Robert Babine of Dorchester. She also leaves two grandchildren, whom she was a loving Nana to, Daniel A. Auger of Arlington and Kaitlyn J. Swanberg of Tampa, Fla., and many nieces and nephews. Marge was preceded in death by her siblings, Robert Urbank, Walter Urbank Jr, Nancy Rudolph, and Phyllis Urbank; her best friend, Dorothy Clemmer; and a longtime companion, Rennie Famosi.

The Auger family wishes their heartfelt appreciation to Marge’s caregiver, Akosua Williams, for all the love and support shown to Marge during her final days.

A graveside service will be held on Monday, June 7, at 11 a.m., in the Howard Street Cemetery, Howard Street, Northborough. There are no public calling hours planned.

Hays Funeral Home, 56 Main St., Northborough is honored to assist the Auger family during this time.

To leave a condolence or to share a memory, please visit www.HaysFuneralHome.com.