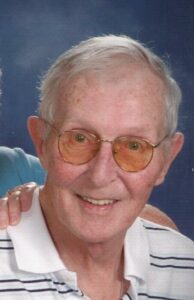 Don was born on June 7, 1929 in Cambridge, one of 10 children of the late John Barry and Marie Edna (Mailloux) Barry. He was born in Cambridge and the family later moved to Watertown. He met his wife while she cared as a nurse for his ailing father. They later moved to Hudson, where they resided for the next 50 years. Don served in the Army Air Force during the Korean War and later had a long career in logistics for the cold storage industry, retiring from Hendries in Southborough.

Don was a former member of the Hudson Concord Elks and enjoyed golf and games of all kinds. Don volunteered for Meals on Wheels and the Hudson Food Pantry after retirement, before falling ill in 2001.

Relatives and friends are invited to visitation hours on Tuesday, June 8, from 4-7 p.m., at Tighe Hamilton Regional Funeral Home, 50 Central St., Hudson. A Mass of Christian Burial will be celebrated on Wednesday, June 9, at 9 a.m., at Saint Michael Parish, 21 Manning St., Hudson, followed by a procession to St. Michael Cemetery in Hudson.

Don’s family wishes for flowers to be omitted and donations be made instead to The American Heart & Stroke Association; (http://www2.heart.org/goto/donbarry) or St. Michael’s Parish Church, 20 High St., Hudson, MA (www.stmikes.org).