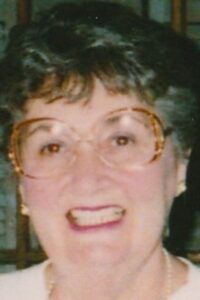 Shrewsbury – Marjorie L. (Anderson) Ahlstrand, 92, of Shrewsbury, died on June 6, 2021 at home, surrounded by family. She was predeceased in 2009 by her loving husband of 60 years, William R. Ahlstrand.

She was born in Millbury, daughter of Gustave and Marguerette (Melius) Anderson. She graduated from Millbury High School.

Mrs. Ahlstrand was a member of the Shrewsbury First Congregational Church for over 60 years and was one of the founders of the prayer group. She also worked as a scout leader in the Cub Scouts and Girl Scouts.

Her family, friends, and Christian faith were her guiding forces in her life. She was fondly called “Toots” by much of her family. She enjoyed picnics, drive-ins, cooking, baking, sewing, and reading. She passed on most of her skills and hobbies to her children and grandchildren.

A graveside burial service will be held on Wednesday, June 9, at 11:30 a.m., at Mountain View Cemetery, section GG, Shrewsbury.

Arrangements are in the care of Rice Funeral Home, 300 Park Ave., Worcester.

In lieu of flowers contributions can be made to St. Jude Children’s Research Hospital.