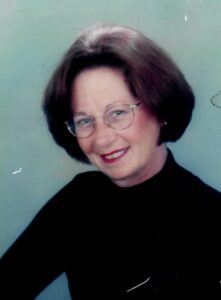 Westborough – Maureen L. “Reenie” Bliss passed away peacefully in the comfort of her own home, surrounded by her loving family, after a long and courageous battle with cancer on June 6, 2021. She was the wife of Richard L. “Coach” Bliss.

Born in Norwood, Maureen was the daughter of the late George Haskell and Selma Jean (Dingwell) Haskell-Erickson. She was raised and educated in Norwood and Westborough, graduating in the Westborough High School Class of 1971.

Maureen was a communicant of St. Luke the Evangelist Church in Westborough and was an active member of the Women of St. Luke’s.

Reenie was a devoted wife. She was most proud to be involved in Coach Bliss’s athletic teams and events. She was his co-director of the Annual Bliss Hopkinton High School Golf Tournament. A student recently wrote to Coach Bliss on Reenie’s passing: “Mrs. Bliss was one of the kindest and most caring individuals I have ever met”. She will be missed by many students and their parents.

Reenie lived life to the fullest. She loved to travel to Aruba, Marco Island, Texas and Cape Cod. She loved vacations with her husband especially to Jackie’s Cape Cod Home. She loved spending time at Craigville Beach with Family and friends. If not at the beach she’d be poolside. She also loved her winter sports, skiing, music, going to concerts and most recently enjoyed Alexa playing any song she could think of. Reenie loved manicures, pedicures, Talbot’s and Coca cola. Her sense of humor and her ability to tell a great story will be missed by so many.

Maureen’s career began at Data General and later Honeywell. She went on to become Director of Travel and Tourism for the city of Lowell. Most recently she was Executive Director at

New England Winter Sports Reps for the past 20 years where she was affectionately known as MB by her NEWSR reps.

Her funeral Mass will be celebrated on Tuesday, June 15, at 10:30 a.m., in St. Luke the Evangelist Church, 70 West Main St., Westborough. Burial will be private in Pine Grove Cemetery in Westborough. There are no calling hours.

A celebration of Maureen’s life will be held at the Knights of Columbus Hall, 17 Willow St., Westborough, immediately following the Mass.

In lieu of flowers, please make a donation in her memory to a charity of your choice.