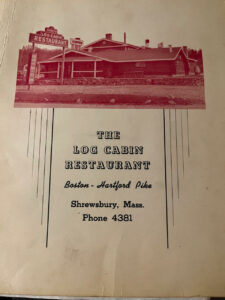 SHREWSBURY – The town of Shrewsbury underwent a huge change in the early 1930s – the highways now known as Routes 9 and 20 were constructed, resulting in easier means of travel in addition to increased traffic.

Because of this, many new businesses grew up along the two highways. One of these was the Log Cabin, located at the corner of Walnut Street and Route 20. The place was a big hit, with several famous personalities visiting, including Frank Fontaine.

There were also scenes filmed there for a Hollywood movie, “Ah, Wilderness.”

Overnight cabins were eventually added to the property to accommodate travelers.

Here we have a copy of a menu from the Log Cabin, including a hand-written insert listing the daily specials, one of which was “Fresh opened lobster salad, F. F. [French Fried] potato [and] coffee – $1.50!”

The insert was printed on letterhead from the “Blatz Beer Company.”

Of more recent interest – the Log Cabin building is still there. Even though it still houses a restaurant/bar business – “Willikers Tex-Mex & BBQ,” the exterior “log cabin” motif has been changed.