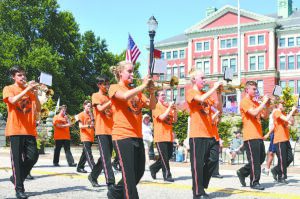 Made via press release, the announcement came three days after Vigeant first confirmed in a COVID-19 reopening update to the City Council that the parade would, in fact, be happening.

“The 2021 parade will mark the 69th year that Marlborough hosts the event which, over the years, has come to mark the symbolic end-of-summer,” that June 10 press release said.

Reflecting on history, Vigeant’s office celebrated the ability to revive traditions put on pause since the coronavirus first surged into the region last year.

This year’s parade will step off at 12 p.m. on Monday, Sept. 6, following its familiar route starting at the intersection of Pleasant and Lincoln Street to travel west onto Lincoln Street, south onto Broad Street and east onto West Main Street. The parade will then continue onto Main Street and turn south onto Maple Street before ending at the intersection of Bolton Street.

Musical performing groups, schools, veterans, fraternal organizations, politicians and civic groups are all invited to complete and submit an online application to march in the parade: www.marlboroughlabordayparade.com.