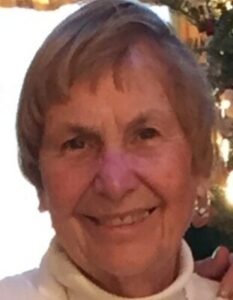 Marlborough – Janet “Jackie” Mary (Jaworek) DiBuono, 80, passed away at her home on June 21, 2021. She had been cared for and was surrounded by her family, while courageously battling pancreatic cancer for almost two years.

Born in Marlborough and a lifelong resident, she was the daughter of the late John and Jeannette (Wright) Jaworek. She graduated from St. Michael High School in Hudson, Massachusetts, and Worcester State College with a teaching degree; later she earned her Master of Arts in Education from Lesley University.

Jackie is survived by her beloved husband of 56 years, Nicholas “Nick”; her two daughters, Marybeth Riley and husband Paul of Southborough and Chatham and Amy Graham and husband Mel of Pittsfield, Maine; and six grandchildren, Benjamin, Thomas, Caroline, Martin, Alexandra and Mason.

Jackie taught for over 30 years at the Bigelow, Mitchell, Jaworek and Richer elementary schools in Marlborough. She loved being a teacher and was awarded Marlborough Teacher of the Year recognition in 2002. Following her retirement, Jackie volunteered at the former Women’s Correctional Institute in Framingham, and served on both the Marlboro Cultural Council and as an Election Clerk. She was a co-founding member of the local Red Hat chapter, and she belonged to a ladies’ walking club. Jackie vacationed yearly with her husband in Aruba, and spent summers on Cape Cod, where she loved walking on the beaches, swimming in the ocean and enjoying the sunshine. She was an avid reader, and belonged to the Marlborough Public Library Book Club. She could complete a 1,000-piece puzzle in a day, enjoyed crossword puzzles and wrote thank you notes until the end of her life.

Jackie loved sports, especially watching all six of her grandchildren participate in their sporting matches. She was a fan of the New England Patriots, and would text her grandchildren during the games discussing plays and scores. As an athlete and advocate for women’s sports, Jackie jogged and played tennis starting in her early 20s and later walked and participated in her 30/30 exercise classes at the senior center.

Jackie’s Catholic faith and her role in the Catholic community was very important to her. She attended daily Mass with friends at St. Matthews’s Church in Southborough. The “girls” would meet for tea after mass and enjoyed local trips together. Jackie taught religious education for nine years, and served on the education board at St. Matthew’s. She was also a Eucharistic minister and lector, and looked forward to her weekly Tuesday meetings with her dear friend, Father Flynn. Jackie prayed nightly for her friends and family.

Her greatest gift was the love she shared with her husband, Nick, daughters, grandchildren, friends and students. She had a terrific laugh, and was a gentle, caring person who made people feel good about themselves. During these last months, Jackie often remarked that even though she had cancer, she was blessed to have a wonderful husband, family and grandchildren who knew and loved her.

Visiting hours will be held on Sunday, June 27, from 2-5 p.m., at the Slattery Funeral Home, Inc., 40 Pleasant St., Marlborough. A funeral Mass will be celebrated on Monday, June 28, at 10 a.m., at St. Matthew’s Church, 26 Highland St., Southborough. Burial will follow at Evergreen Cemetery, Wilson Street, Marlborough.