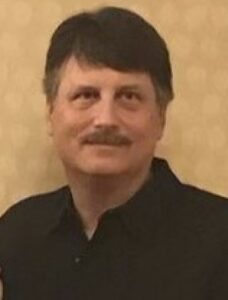 Marlborough – Theodore “Ted” A. Marakoulos, 63, of Marlborough, died on June 21, 2021 at Marlborough Hospital.

He was born in Boston, the son of the late Andrew and Thelma (Jouvelakas) Marakoulos. Raised in Framingham, he graduated from Framingham South High School, Class of ’76, and earned his BA from UMass Boston, Class of ’80.

Ted worked in Real Estate all his life, most recently as a National Recruiter for ValueNet. He had a passion for basketball, often he would take his daughter to The Boston Celtics games.

He is survived by his wife of 23 years, Deborah Marakoulos, and his precious daughter, Emma Marakoulos, both of Marlborough; his sister, Angela Baglaneas and her husband John of Grafton; his niece, Christen; and three nephews, Ted, Michael and Chris; as well as his loving companion, Willow, his dog, and will be missed by his many loving lifelong friends.

A funeral Mass will be held on Friday, June 25, at 11 a.m., in Sts. Anargyroi Greek Orthodox Church, 9 Central St., Marlborough. Calling hours will be held from 9-11 a.m. prior to the Mass, also in the church. Burial will follow in Woodlawn Cemetery of Everett.

Memorial donations may be made in Ted’s name to Sts. Anargyroi Church.