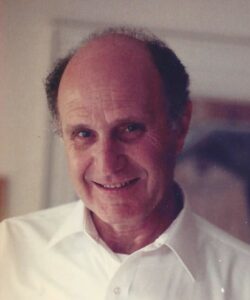 Bob was born in Boston on June 8, 1930, the only son of the late Frank P. and Barbara J. (Lydon) Sacco. He graduated from Boston English High School and subsequently attended Boston College, where he earned his bachelor’s degree in chemistry and his master’s degree in education. Bob was drafted by the United States Army and honorably served his Nation in the Korean War from 1952 until 1954. He married the love of his life, Joan M. Berg, on Jan. 16, 1954, while still active duty in the Army, and shortly after they settled in Hudson, where they currently reside. He had a long and successful career as an engineer for several local Defense companies, before eventually retiring.

Bob was a longtime member of Saint Michael Parish and the former Christ the King Church, where he served as an eucharistic minister. He was also a member of the Knights of Columbus as well as local Boy Scout Troop 77, where he volunteered as an assistant scoutmaster.

A period of calling hours will be held on Thursday, July 1, from 4-7 p.m., at Tighe Hamilton Regional Funeral Home, 50 Central St., Hudson. A Mass of Christian Burial will be celebrated on Friday, July 2, at 11 a.m., at Saint Michael Parish, 21 Manning St., Hudson, followed by Committal Services at Saint Michael Cemetery in Hudson.

In lieu of flowers, if you would like to make a gift to the Paula Sacco Scholarship Fund, please send your contribution to Patricia Bertram, President, Catholic Community Fund, 66 Brooks Dr., Braintree, MA 02184.