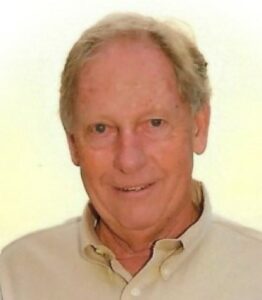 Shrewsbury – John W. Harding, MD, 84, longtime Shrewsbury resident and beloved pediatrician, passed away peacefully after a courageous battle with cancer on July 11, 2021 in the comfort of his home, with his loving family by his side.

Born in Pittston, PA, John was a 1955 graduate of Archbishop Williams High School in Braintree and played on the school’s State Catholic High School Championship team. He went on to attend Providence College, where he achieved his Bachelor’s degree in 1959. He attended medical school at University College Cork, in County Cork, Ireland, graduating in 1964. It was there in Ireland that he fell in love with Grace, and the pair were married on June 23, 1964, in Dublin, Ireland. John was also a Captain in the U.S. Army Reserves and was honorably discharged in 1972.

He began his medical career in 1964, at Carney Hospital in the Dorchester neighborhood of Boston. He later moved west to Central Massachusetts in 1966 and went on to become Chief Resident at Saint Vincent Hospital in Worcester until 1968. Dr. Harding went into private practice in 1968, and founded his own private practice, Harding Pediatric in Worcester, from which he retired in 2008, after passionately practicing for 40 years. For a number of years, he was also Chief of Pediatrics at Hahnemann Hospital in Worcester.

John was a member of the Massachusetts Medical Society and was the personal physician to Audrey Santo – who is now being petitioned for sainthood. He was also the producer and host of Raising Children with God, the cable television program on SPAC in Shrewsbury. John was the founder and chairman of the Respect Life Committee at Saint Mary’s Church in Shrewsbury, he was a longtime board member of Visitation House and Problem Pregnancy, both in Worcester.

John was an avid tennis player and golfer, loved basketball, and loved to travel. Most importantly, his family and grandchildren were his heart and soul. He was a faithful parishioner of Saint Mary’s Church in Shrewsbury and had a true devotion to the Blessed Virgin Mary.

In lieu of flowers, memorial donations may be made to Visitation House in Worcester at www.Visitationhouse.org.

Relatives and friends are invited to visit with Dr. Harding’s family on Friday, July 16, from 4-7 p.m., at the Britton-Shrewsbury Funeral Home, 648 Main St., Shrewsbury. His funeral Mass will be celebrated on Saturday, July 17, at 12:30 p.m., at Saint Mary’s Church, 640 Main St., Shrewsbury, followed by burial with military honors in Mountain View Cemetery.