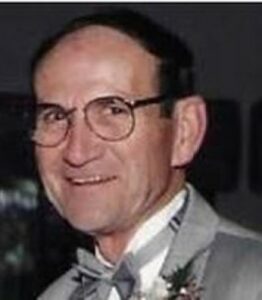 Francis was born on Jan. 23, 1932, in Southbridge, the son of Collis and Beatrice (Smith) Christian and graduated from Uxbridge High School.

He was employed by Wyman-Gordon in Grafton for 35 years as a machinist and toolmaker, retiring in 1994. He then was employed part-time for Fallon Clinic and Clinitech.

Mr. Christian was an Army Veteran of the Korean War, stationed in Germany for 18 months. He enlisted Dec. 3, 1951 and was honorably discharged from active service as a Corporal on Nov. 16, 1953. He received the American Army of Occupation Medal and National Defense Service Medal.

He was a member of St. Phillip’s Catholic Church in Grafton, St. James Prayer Group, and Wyman-Gordon’s Gung-Ho Club. Fran was also a Cub Scout Master and baseball coach. He was an avid fisherman and enjoyed sports. By far, the greatest joy of his life was his family. He had an exceptional relationship with his son and sacrificed many years of his life to the caring of his grandchildren.

He was a very caring and compassionate man who put everyone’s needs before his own, devoting many hours to the care of the elderly and all those who were in need. Francis was an active community member who loved sitting on the town common, and telling stories, particularly to his friends at the Donut Star. He will be missed by all.

Calling hours will be on Thursday, July 22, from 5-7 p.m., at Roney Funeral Home, 152 Worcester St., North Grafton. The funeral will be held on Friday, July 23, at 11 a.m., at St. Philip’s Church on West Street in Grafton. Burial to follow at St. Phillip’s Cemetery in Grafton.

Rather than making a donation, take a friend to breakfast. Fran would have liked that.