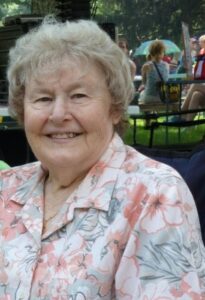 Northborough – Margaret Ellen Wheeler, 93, passed away peacefully on July 14, 2021, at Whitney Place Assisted Living Facility in Northborough. Born in Marlborough, she was the daughter of Herbert Alonzo and Elizabeth (Misener) MacKenzie. She was wife of the late Donald R. Sowden for 15 years and the late Donald H. Wheeler for 42 years.

She was a 1945 graduate of Marlborough High School and went on to receive a medical associate degree as a Phlebotomist and Laboratory Technician. She worked in this capacity at Belmont Memorial Hospital in Worcester and as an employee of Dr. Columbo, at his private practice, until his death in 1965.

Margaret was an excellent cook who loved cooking and baking for family, friends, and church functions. Her invitations to a cup of tea will be greatly missed. She had an outgoing personality and quick wit that allowed her to start a conversation with anyone; anytime, as if they had been lifelong friends. She always seemed to know someone wherever she went.

A memorial service and urn burial at Rural Cemetery of Southborough are pending.

In lieu of flowers, donations in her memory may be made to the Salvation Army at https://www.salvationarmyusa.org/usn/ways-to-give/