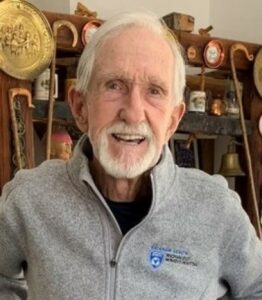 Southborough – On July 18, 2021, John C. Jones passed away peacefully in the comfort of his beloved home. He was 88 years old.

Jack, as he was affectionately known by friends, was born and raised in Utica, N.Y., one of two children to first generation Welsh immigrants, John M. and Mary A. Jones. He graduated from the Utica Free Academy, class of 1951, prior to earning his BS in Psychology in 1955 at Hartwick College.

As fate would have it, on the very first day at Hartwick College, Jack met a beautiful young woman by the name of Janet Harrer. This was the beginning of a love story which spanned 64 years of marriage.

With a determination to grow professionally, Jack and Janet moved to Massachusetts and Jack joined Raytheon in 1959 as an engineering recruiter. Within a year he was promoted to manager of the employment function for the space and information system division. Over the 35 years of dedicated employment at Raytheon Jack continued to take on new responsibilities and upon his retirement held the position of Employment Manager for Raytheon Equipment Division. Jack was very highly regarded and respected by his colleagues.

Jack proudly held onto his Welsh heritage and enjoyed incorporating it within his Southborough home. While in his 50s Jack was able to purchase his family’s homestead in Wales which dates back to the 13th century and to the last royalty of Wales, Prince Llewellyn the Great. Over the next several years Jack completed the homestead’s restoration and looked forward to sharing it with his family.

After retirement Jack and Janet enjoyed wintering in Punta Gorda, Fla. Jack was very hands-on and enjoyed keeping all of his properties neat and well maintained. He enjoyed playing tennis, most especially during the Southborough summer matches, at St. Mark’s School. As a man of great faith, he was devoted to his Christian beliefs. He was a devoted husband, a loving father and a doting grandfather.

Respecting Jack’s final wishes, his funeral service was private. Jack was then laid to rest in Rural Cemetery, Southborough.

Services were under the dedicated care of Hays Funeral Home, 56 Main St., Northborough. To leave a condolence, please visit www.HaysFuneralHome.com.