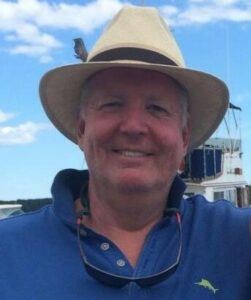 Southborough – Paul “Moon” MacArthur, 57, of Southborough, went to heaven to be with his family and friends that passed before him on July 23, 2021, after being suddenly stricken ill at his home in Wells, Maine, the place he loved the most.

Moon graduated from Assabet Valley Regional Technical High School in 1983 with a culinary arts degree and worked in many restaurants before beginning his career on the Massachusetts Turnpike. He worked “out on the pike” helping patrons for nearly 33 years and was hailed a “Highway Hero” on more than one occasion for saving multiple lives. He received the Massachusetts State Police Lifesaving Award in 2004 after rescuing two people from a burning car. He also delivered oil for Northborough Oil Company for many years.

Moon worked hard and played harder. His motto was “enjoy yourself” and that he did – he loved spending time in Wells, Maine, riding his Harley, watching the Red Sox, cooking for his friends, going to the casino and telling a joke (or two). As he often used to say, “I can have fun in a phone booth!”

One of his proudest accomplishments was running the 100th Boston Marathon in 1996 – he would always joke about how a few of his friends dared him to run and he actually finished.

He was larger than life and will be missed tremendously. Think of him every time you look up at the bright moon, as he will always be shining down on us. “Live by the sun, love by the moon.”

He leaves his wife of over 32 years, Katharine (Gunning) MacArthur, who he has loved since the first grade; his daughter, and pride and joy, Elizabeth MacArthur; his mother, Charlotte (Grace) MacArthur; his siblings, Lee-Ann Hamlin and Brian MacArthur; several nieces and nephews; and many, many friends. He also leaves his adored lab, Lola, and African Grey parrot, Zoey. He was predeceased by his father, James MacArthur.

Memorial donations may be made in Moon’s memory to the James A. Gunning scholarship fund, 8 Rice Rd., Hopkinton, MA 01748.