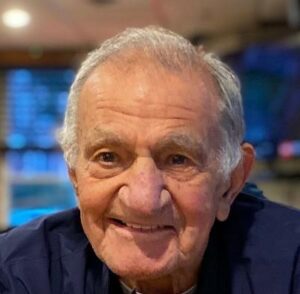 Southborough – Paul J. Berry, 92, a lifelong resident of Fayville, passed away peacefully on Aug. 1, 2021 after a period of declining health. Born in Fayville, he was the son of the late Maria (Dallavalle) and Batista Berri.

Paul attended the former Fayville School on Oak Hill Road, a one room schoolhouse and went on to the former Peter’s High School. He was a WW II Army veteran serving in the Pacific Theatre. Paul was the proprietor of several local businesses, Ye Old Meat Shoppe and Southborough Dairy, his belief of personalized customer service was the cornerstone of his businesses. He later worked as a Production Shift Supervisor for Breyer Ice Cream, a division of Kraft Foods, where he retired from.

In 1969, Paul was elected as Southborough’s Town Clerk. and held the office until 2015 when he retired for the second time. He oversaw all of the local, state and federal elections, and regular and special town meetings. He was very proud of his time as Town Clerk and the citizens of Southborough were well served by him. As a Justice of the Peace and a Notary Public, Paul performed many marriages in locations from the Southborough Town Hall to the islands in the Caribbean – especially enjoyed the remote locations.

Paul was a member of the Veterans of Foreign Wars, Bagley Fay Post, Knights of Columbus, Phil Sheridan Council, former chair of the Southborough Democratic Town Committee, and member of Mass Town Clerks Association where he made numerous lifelong friends. He was a long time, proud member of the Fayville Athletic Association, and most recently it’s most senior member. He was many times the ‘chef in charge’ of the many Porchetta Dinners, that were held there.

Paul is survived by his children, Bruce Berry and his wife Lisa of Maine, Dennis Berry and his partner Deb Champane of Blackstone, and Kathy Landry and her husband Kevin of Westborough; his grandchildren, Dennis Berry, Myshanna Simpson, Jay and Nicholas Landry, Randy Wickham; and many great-grandchildren and numerous nieces and nephews.

In addition to his parents, he is predeceased by his wives, Louise Ann (Bossi) Berry and Ruth (O’Neil) Berry, his siblings, Joe, Rena, Caroline, Lawrence, John, Mary and Eleanor.

Calling hours will be held on Wednesday, August 4, from 4 to 7 pm at the Morris Funeral Home, 40 Main Street, Southborough.

A Mass of Christian burial will be held on Thursday, Aug. 5, at 10:30 a.m., at St. Anne Church, 20 Boston Rd., Southborough. Burial will follow in the Southborough Rural Cemetery. The family would kindly like to remind all non-vaccinated people to please wear a mask.

Memorial contributions may be made in Paul’s memory to the Fayville Athletic Association, 6 Grove St., Fayville, MA 01745, for renovations and the scholarship fund.

To leave words of condolences to the family, please visit www.morrisSouthboroughfuneral.com.