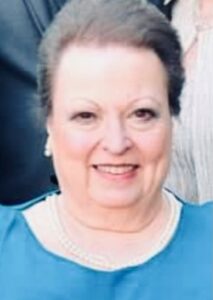 Born in Newton, she was the daughter of the late William Peters and Ann (Nicholson) Toohey. She was a graduate of Marlborough High School, Class of 1960.

In 1976, she completed the Dental Assisting Certificate Program at Assabet Valley RVHS. She was employed by Dr. Francis Paglia until 1988, and then joined the practice of Dr. James Naumes and later Dr. Daniel O’Brien.

Anne-marie was member of the National and MA Dental Assistant Associations. She was also a former member of the Marlborough Junior Women’s Club, the Gens Bowling League, and the Marlborough Historical Society, where she served as Secretary. In 1998, Anne-Marie became a Justice of the Peace and a Massachusetts Notary Public Commissioner. She was a member of the Immaculate Conception Parish.

Anne-marie was a great conversationalist. She could, literally, talk to anyone about anything at any given time and with pleasure. She loved to shop and had a flair for decorating. She was an avid traveler with a special fondness for the Main Streets and Back Roads of New England. Anne-marie was a doll maker/collector and a devoted Red Sox and Patriots fan. Her greatest joy was spending time with family and friends.

She is survived by her daughter, Allyson (Forrest) McDonnell and her husband David of Marlborough; her son, Kevin Forrest and his partner Kathey Alexander of Fryeburg, Maine, her sister, Deborah Green and husband Kelly of Virginia Beach, Va.; her brother, William Peters of Islamorada, Fla.; her grandchildren, Sean McDonnell and wife Lauren, Ryan McDonnell, Delaney Forrest and Kaylan Forrest; and her great-grandchildren, Liam and Connor McDonnell.

A funeral Mass will be celebrated on Wednesday, Aug. 11, at 9 a.m., at the Immaculate Conception Church, 11 Prospect St., Marlborough. Burial will follow at St. Stephen’s Cemetery, Fenwick Street, Framingham.

In lieu of flowers, gifts may be made to The Friends of Marlborough Seniors, P O Box 793, Marlborough, MA 01752.