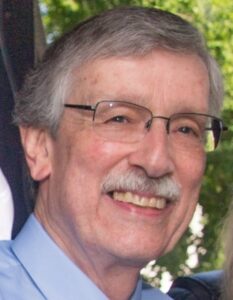 Westborough – Timothy W. Coleman, 76, of Westborough, passed away on Aug. 1, 2021, at the UMass University Campus in Worcester, surrounded by his family. He is the beloved husband to Kathryn M. (Juckas) Coleman.

Born in North Tonawanda, N.Y., he was a son of the late John and Joyce (Chester) Coleman.

He graduated high school at West Genesee High School in Camillus, N.Y. He went for his undergrad at Lemoyne University Syracuse, and his master’s at Rensselaer Polytechnic Institute in Troy, N.Y.

Prior to retirement, Mr. Coleman was employed as an analytical chemist for Polaroid and Johnson Matthey.

He was a parishioner of Our Lady of Good Counsel in West Boylston and enjoyed spending time with his family and friends. He was a passionate historian of World War II battles, especially those that involved his father’s ship. His immense knowledge of science was only eclipsed by his love for singing Buddy Holly songs with his grandchildren!

In addition to his wife, Kathy, he is survived by his two sons, Brett M. Coleman and his wife Barbara of Arizona and Darren C. Coleman of Gardner; six grandchildren, Brett G. Coleman, Bryce A. Novac, Elizabeth A. Coleman, Juliette K. Coleman, Christian J. Coleman, and Emily K. Coleman; his siblings, Lynn Seligman, Michael Coleman, and Daniel Coleman; and many nieces and nephews.

His funeral Mass will be held privately at Our Lady of Good Counsel Parish, West Boylston.  Entombment at Notre Dame Cemetery and Mausoleum, Worcester, will also be private. There are no calling hours.

In lieu of flowers, donations in his memory may be sent to Partners in Charity – Diocese of Worcester (www.partners-charity.net)