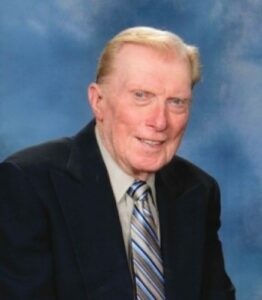 Clinton – On the afternoon of Aug. 4, 2021, Alfred Henry Graefing, 89, was escorted Home by angels and into the presence of his Lord and Savior, Jesus Christ. At the time of his passing, Al was surrounded by the love of his family.

Born in Brooklyn and raised in the Bronx, Al was one of six children to the late Louis and Johanna M. (Feldmann) Graefing. He was a graduate of DeWitt Clinton High School prior to his family relocating to Maywood, N.J. where he studied at Rutgers University’s Paterson, NJ campus. Although he would not return to live in New York, he would remain a loyal Yankees fan throughout his life.

Al’s life followed the well-known quote of God, Family and Country. He was true to his Lutheran faith throughout his life and remained active in every church he attended. He previously served in various leadership roles at Zion Lutheran Church in Maywood, N.J. and Our Savior Lutheran Church in Fair Lawn, N.J. Most recently, he enjoyed worshiping and serving at Good Shepherd Lutheran Church in Westborough.

In 1952, he enlisted into the U.S. Army where he honorably served his country during the Korean War. Upon his return Al worked his entire career with Huffman-Koos where he served in various sales positions. With the Lord’s plan, Al met a beautiful coworker, Eleanor “Elly” D’Ambrosio and on Sept 6, 1958, they were joined in marriage. They were blessed with two beautiful daughters, Cathy and Nancy. In 2006, the couple relocated to Clinton. Al and Elly shared their love and faith together for 49 years until Elly’s own passing in 2008.

Al had a deep respect for his country. Prior to his active duty, Al volunteered within the New York and New Jersey National Guard. In 2010 Al became an active member of the Vincent D. Picard American Legion Post 234 of Northborough where he was an untiring supporter of the Post’s mission and a friend and comrade to the other members. Al volunteered with the Honor Guard, countless civic activities, elementary school visits and Memorial Day observances. In 2019, he was awarded the honor of Legionnaire of the Year. He also gave of himself in his own community of Clinton. As a member of the Woodlands Community Committee he successfully lobbied for a new Veteran’s Memorial Park.

Al is survived by his devoted daughters, Cathy Dorey and her husband Anthony of South Plainfield, N.J. and Nancy Cooper and her husband David of North Grafton; four grandchildren whom he was extremely proud of, Nicholas Dorey and his wife Katherine, Dylan Dorey, Jack Cooper, and Griffin Cooper. Al was looking forward to meeting his first great-grandson this fall. Al is also survived by his sister, Vera Depalma and her husband Jack of Seattle, Wash., and many nieces and nephews. He was preceded in death by four siblings, Henry Graefing, Evelyn Loche, Louise Seda, and Marie Malamud.

Calling hours will be held on Tuesday, Aug. 10, from 4-7 p.m., at Hays Funeral Home, 56 Main St., Northborough. A funeral will be held the following week on Monday, Aug. 16, at 10 a.m., at Our Savior Lutheran Church, 22-15 Broadway, Fair Lawn, N.J. Burial with Military Honors will follow at George Washington Memorial Park, Paramus, N.J.

Due to family health concerns, mandatory wearing masks and social distancing will be required at the funeral in New Jersey.

Arrangements are entrusted to Hays Funeral Home, 56 Main St., Northborough. To leave a condolence, or to share a memory, please visit www.HaysFuneralHome.com.