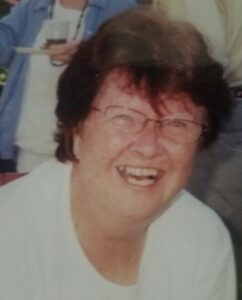 She was born on Oct. 22, 1940, in Newport, R.I., the daughter of the late John L. and Grace M. (Delahunt) Smith. She was raised in Jamestown, R.I., attending elementary school there, and St. Catherine Academy in Newport for high school.

In 1962, Nancy earned a bachelor’s degree in English at the College of Our Lady of the Elms (now Elms College) in Chicopee.

Nancy was an elementary school teacher, getting her start in Nyack, N.Y., and also teaching in Brockton and, later, Hudson.

On Aug. 6, 1966, she wed Vincent O’Brien in Jamestown. The couple first settled in Hyde Park, then moved to Hudson in 1968 to raise their family. In 2015, they moved to the New Horizons assisted living center in Marlborough.

Nancy enjoyed traveling to her native Jamestown, Cape Cod and, in her later years, Nokomis, Fla., as well as gardening and baking. She was especially proud of winning the first-place blue ribbon at the St. Michael’s Country Fair apple pie contest in 1978.

She was a longtime communicant of St. Michael Church in Hudson.

Besides her parents and husband, she was predeceased by a brother, John L. Smith Jr., and a sister, Katherine “Kay” (Smith) Murphy.

Survivors include two sons, Daniel G. and his wife Barbara of Hudson, N.H. and Michael C. and his wife Juliette of San Ramon, Calif.; a daughter, Maura A. Miller and her husband Thomas of Marshfield Hills; seven grandchildren, Molly O’Brien and her fiancé, Conner Lawston of Los Angeles, Shane O’Brien of Las Vegas, Megan O’Brien of Quincy, Sarah O’Brien of Hudson, N.H., and Meredith, Maeve and Maggie Miller, all of Marshfield Hills; two brothers, Frederick Smith and his wife Barbara of Guilford, Conn. and Richard Smith and his wife Marilyn of Naples, Fla.; and several nieces and nephews.