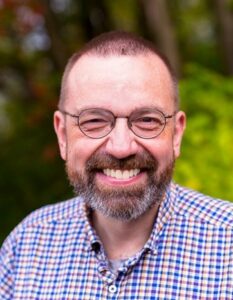 Fr. Carlson was primarily raised in Shrewsbury, where his parents were long-time residents and where he and his former wife Karen raised their children.

Fr. Carlson was a proud graduate of Worcester Academy. He earned a Bachelor’s Degree in history from Trinity College in 1985, and obtained his Master of Divinity Degree at the Berkeley Divinity School-Yale University in 1989.

While living in Shrewsbury, Fr. Carlson held many volunteer positions including Chaplain for the Shrewsbury Fire Department, Headmaster of Cub Scout Troop 114, Parent Leader for the Boy Scouts of America National Youth Leadership Training Program (NYLT), and town committee and finance committee member. Fr. Carlson was a long-term choir member at St. Mark’s Episcopal Church in Southborough, where he also served on the Parish Council. He is an alumnus of the All Saints Children’s Choir in Worcester, and travelled with the musical production Up with People.

Fr. Carlson worked in many agencies as a mental health and pastoral counselor, including his most recent position at Rutland Mental Health. He also served as the Chaplain and Bereavement Coordinator for Visiting Nurse Association & Hospice of the Southwest Region (VNAHSR) for several years.

Fr. Carlson was ordained into the Holy Orders of Priesthood in 2010 in the Anglican Diocese known as the Anglican Network in Canada. In 2016 he was installed as Rector at All Saints.  He was devoted to his parishioners and clients. Those who knew him will remember his friendly demeanor, his sharp intellect, and his keen sense of humor.

Fr. Carlson was loving and devoted father of James, Rachel, and Stephen Carlson. He is also survived by his former wife, Karen; a brother, Jonathan Carlson; his wife, Stephanie Carlson, and their children, Alexander and Nils Carlson, along with several aunts, uncles and cousins.

There will be a requiem Mass on Saturday, Aug. 21, at 11 a.m., at Holy Trinity Anglican Church, 472 Lincoln St., Marlborough. All are welcome. A reception will follow at the church.