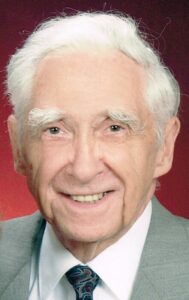 Westborough – Gabriel A. Leblanc, 94, of Westborough, passed away on Aug. 17, 2021 at Care One Millbury. He was born in Montreal, PQ, Canada on June 24, 1927 to the late Alberic and Agnes (Laflamme) Leblanc. He is the beloved husband of Katherine (Scheffley) Leblanc.

He became a professor of geophysics at Laval University in Quebec City in 1966. In 1968 he and Katherine were married and in 1970 he became a research scientist for the Department of Energy, Mines and Resources of the Canadian Federal Government in Ottawa, Ontario. He was lured back to the States in 1977 to work for Weston Geophysical/Baker Engineering as a Senior Staff Consultant for the seismic safety of nuclear power plants until his retirement in 1999.

During his retirement he tended to his vegetable gardens, enjoyed many trips to foreign places, summers in Maine and weekends at his condo in New Hampshire spent with family and friends.  He enjoyed his family the most, especially his granddaughters who learned from him the love of the French language and the ability to recognize different rocks.

He is survived by his loving daughter, Genevieve Benton and her husband Mark; his adored twin granddaughters, Emily and Julia; and many nieces, nephews and friends. He was the brother of the late Moril Leblanc and Joseph Leblanc.

A funeral Mass will be celebrated on Monday, Aug. 23, at 10:30 a.m., in St. Luke the Evangelist Church, 70 West Main St., Westborough. Burial in St. Luke’s Cemetery will be held privately at a later date.

Calling hours are on Sunday, August 22, at 2-4 p.m., at Pickering & Son Westborough Funeral Home, 62 West Main St., Westborough. The family requests that facial masks by worn during calling hours and the funeral Mass.

In lieu of flowers, donations may be made to the Alzheimer’s Association www.alz.org.